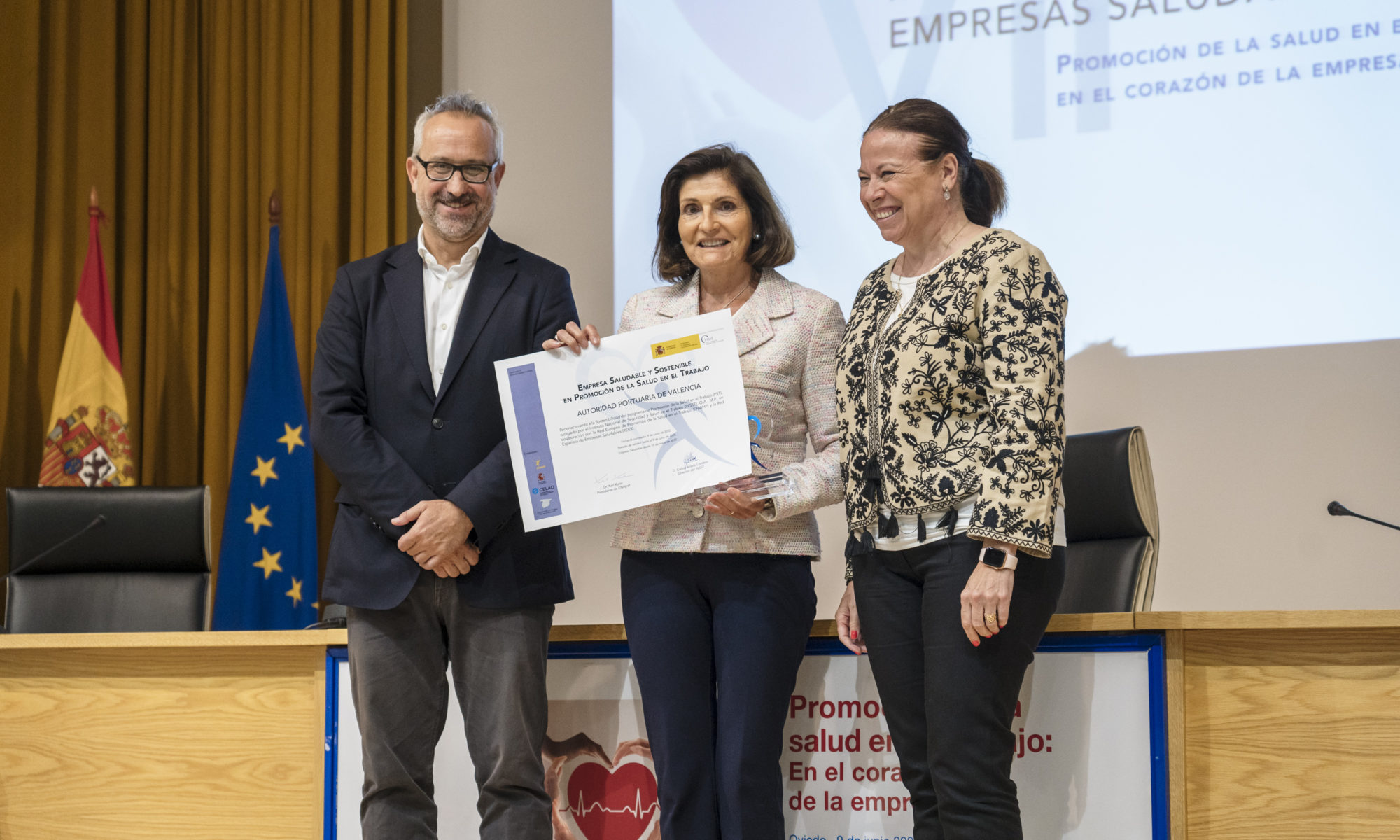 During the 7th Meeting of the Spanish Network of Healthy Companies, the PAV received the diploma of “Healthy and Sustainable Company in Health Promotion at Work” from the National Institute for Safety and Health at Work (INSST).

The head of Medicine and Health Promotion at Work at the PAV, Dr. Amparo de Leyva, received this award, which highlights the value of the health promotion activity among workers carried out by Valenciaport and encourages actions in favour of this cause.

The INSST also awarded the PAV the prize for “Best Action in Cardiovascular Health Promotion”.

The Port Authority of Valencia (PAV) has been recognised as a Healthy and Sustainable Company in the Promotion of Health at Work by the National Institute for Safety and Health at Work (INSST) in collaboration with the European Network for Workplace Health Promotion (ENWHP) and the Spanish Network of Healthy Companies (REES).

In 2017, the PAV was already recognised for its model of good practice in “Promoting Health at Work”. However, on this occasion it has also been awarded as a Healthy and Sustainable Company, an award that aims to recognise the work of organisations in promoting the health of their workers. Therefore, receiving the award implies that the organisation is not only committed to the cause, but that it also promotes actions in practice with the aim of caring for the health of its workers.

This award was collected by the head of Medicine and Health Promotion at Work of the PAV, Dr. Amparo de Leyva, from the director of the INSST, Carlos Arranz and the director of the Asturian Institute for the Prevention of Occupational Risks, Miryam Hernández.

In addition, the PAV has also been honoured in the first edition of the “Best Action in Cardiovascular Health Promotion” award by the INSST and the Spanish Heart Foundation (FEC) for its programme to promote healthy lifestyles in the population and thus prevent the onset of cardiovascular diseases.

This award is an endorsement of Valenciaport’s health promotion strategy, which guarantees the best working conditions for employees in terms of quality, sustainability and integrity, promoting actions focused on facilitating the adoption of healthy lifestyles and generating a culture of physical and emotional well-being within the company’s strategy.

Both awards were presented at the VII Meeting of the Spanish Network of Healthy Companies held in Oviedo. An event that analysed current situations of concern to the world of work and the workers themselves. Specifically, this year’s central theme revolved around the prevention of cardiovascular risk in the company, in line with the objectives of the Health and Safety at Work Strategy.

The Instituto Nacional de Seguridad y Salud en el Trabajo O.A., M.P. (INSST) is the specialised technical scientific body of the General State Administration whose objective is the analysis and study of health and safety conditions for workers in the workplace. The European Network for Workplace Health Promotion (ENWHP) is a platform that aims to improve the health and well-being of workers and reduce the impact of work-related injuries. It is also a body for collecting and disseminating examples of good practice and methods of workplace health with a view to increasing knowledge at European level on methodologies and examples.