This section provides a description of the infrastructure currently under development at ports operated by PAV:​​​​​​​​​​​​​​

Construction of new roas access at the Port of Gandia 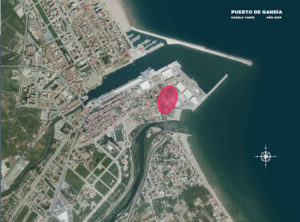 The work also included an earth retaining wall and the concrete perimeter wall bordering the Venecia neighbourhood, in accordance with the new ground plan of the area, and pedestrian access from the neighbourhood itself. The gate area is protected by a canopy, below which are different armoured huts so the Port Police and the Guardia Civil can carry out their control duties. 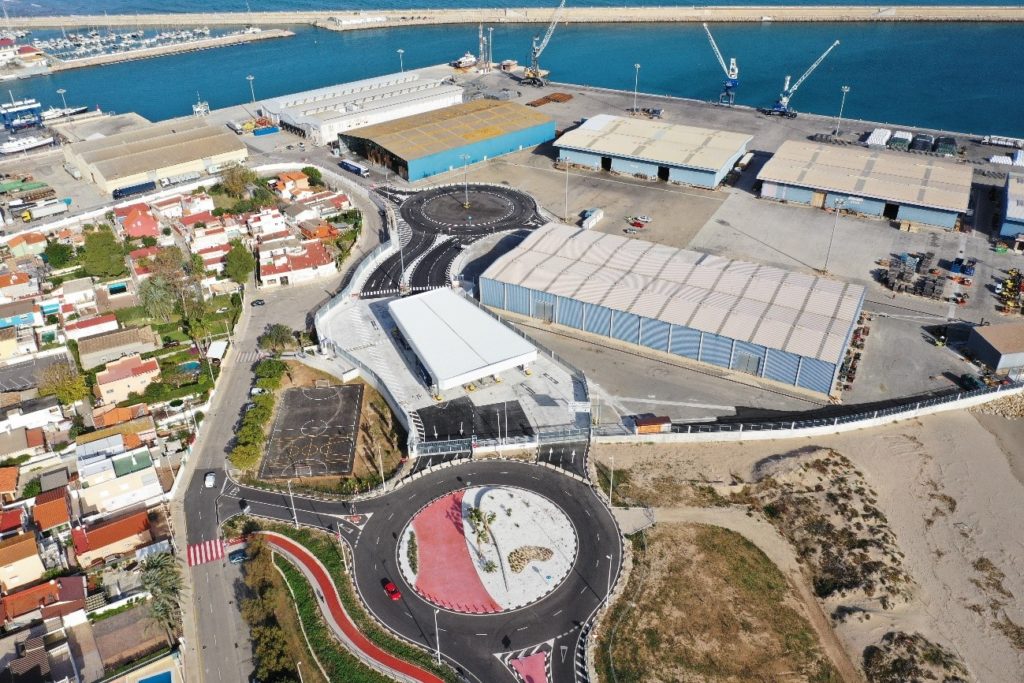 Works have been completed to improve the bearing capacity of the Serpis Quay at the Port of Gandia, with the objective of allowing larger scale equipment of types other than those currently in operation to be used at the terminal in loading and unloading operations.

The structural improvement of the quay was carried out along the entirety of its 319 metres in length and basically consisted of the replacement of the original cantilever beam with a larger one made of reinforced concrete. Into the back of this, the surface concrete slab – also reinforced- was embedded to support the chocks or tracks of the new stevedoring crane equipment. 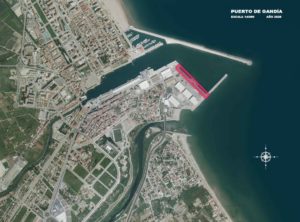 Schematically, the works were divided into five parts:

The works were completed in October 2021 at a cost of close to two million euros. 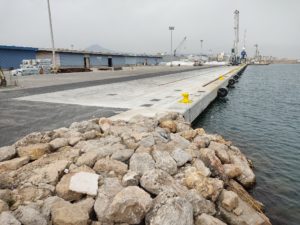 The new Border Control Post at the Port of Sagunto will allow the inspection of goods of animal and vegetable origin, thus responding to the export and import needs of the companies that make up the economic fabric of the province, making it possible to diversify the traffic that can operate in the port. 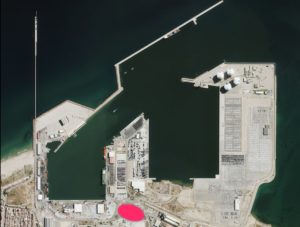 The entire programme is developed on a single floor which is located on a 31,200 m2 plot dedicated, for the most part, to the parking of heavy vehicles.

The goods inspection area is divided into five large blocks according to the type of goods to be received, stored and inspected. Namely:

Each block is equipped with goods reception rooms, including loading and unloading bays, inspection rooms, warehouses and chambers. The installation is prepared so that, if necessary, each of the inspection blocks can house an additional dock. The chambers for the storage of goods have different temperature conditions, being classified into ambient temperature chambers, refrigeration chambers, freezing chambers and bitémpera chambers.

At the southeast end, outside the main volume of the building, there are three small auxiliary buildings to house the storage of sampling material, a fire-fighting unit with its water tank, a transformation centre and a generator. Attached to the fire-fighting unit building are toilets for the users of the lorry parking area.

The execution of the works was carried out between July 2019 and May 2020 at a cost of 4 million euros, having been co-financed through the European Union’s “Connecting Europe” mechanism. 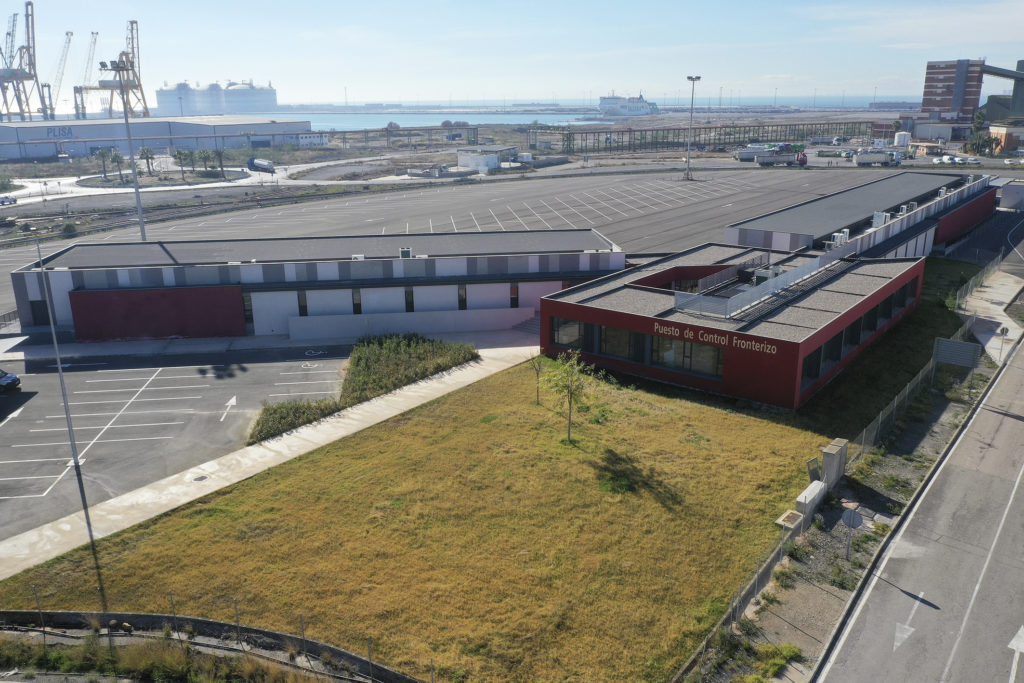 New access and relocation of the gates of the Public Container Terminal of the Port of Valencia.

In order to adapt to the new standards of competitiveness, the Port Authority of Valencia has put out to tender the works for the remodelling of the Príncipe Felipe Railway Terminal in the Port of Valencia so that convoys of 750 m in length can be operated and sufficient space is reserved to be able to reach up to 1,000 m in the future.

The extension of the tracks, which this project entails, was incompatible with the old access to the Public Container Terminal, and two main actions were previously necessary: on the one hand, the relocation of the gates and their installations; and on the other, the construction of a new access road to the new location.

As a whole, these were the fundamental units carried out:

The two works were co-financed by the European Union through the project “Improvement of the hinterland rail connection to the Port of Valencia” (CONNECT VALENCIAPORT), within the “Connecting Europe Facility” (CEF) – INEA programme which regulates funding for trans-European transport networks (TEN-T Network).

The implementation of both projects, as a whole, was carried out between July 2018 and August 2019 at a cost of 4.1 million euros. 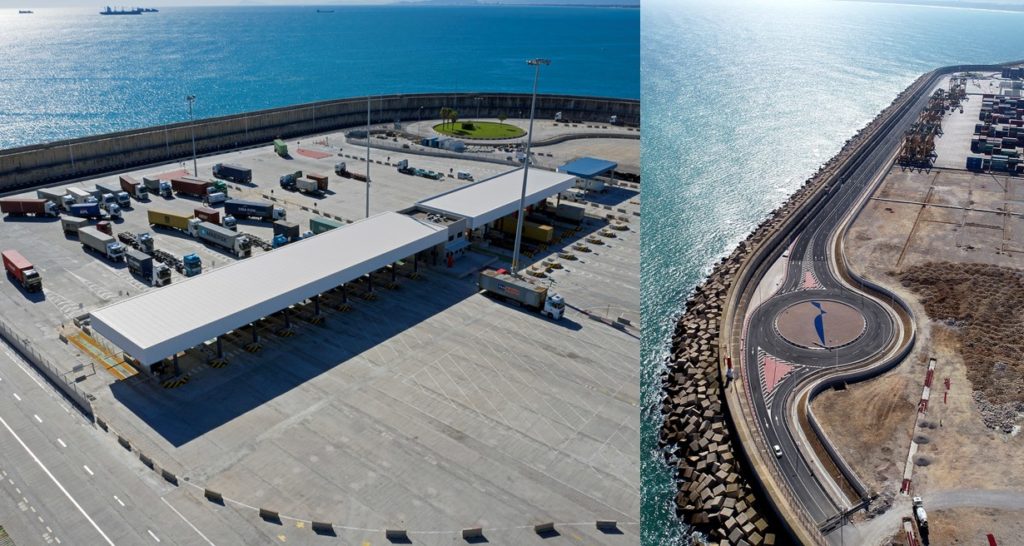 Dredging and deepening of the Levante and Dársena Sur docks in the port of Valencia.

In order to respond to the new operational needs arising from the berthing of the latest generation Triple-E container ships, which require the use of larger equipment in stevedoring operations, an increase in the draught of the docks and their quays, the reinforcement of their foundations – formed by caissons – by means of a solution that does not compromise their stability, the construction of new superstructures and the adaptation of all their elements to the new use are required.

The increase in the depth of the quays was carried out on a total of 1,980 ml of mooring line and required the following activities:

Three different types of equipment were used for the dredging of the docks: a suction dredger in motion with a bucket, a backhoe dredger with a transport dredger and a bottom leveller towed by a tug. The work was carried out on a net area of 87 ha, and the material obtained – 646,000 m³ – was transported and deposited at the bottom in an inland plot protected by protective dykes. To monitor the quality of the water, sediments and dispersion of the turbidity plume, 23 monitoring stations were set up. Refurbishment of the North Dock of the port of Gandía.

The Port Authority of Valencia and the Gandía City Council agreed, through a Collaboration Agreement, to promote public accessibility to the North Dock of the port of Gandía, in which the APV was responsible for the execution of the works of the refurbishment project.

The project consisted of the construction of a 1,040 metre long pedestrian walkway along the entire length of the dock, built with mixed concrete made of steel and synthetic fibres to increase durability in the aggressive marine environment.

It was also provided with elements of value for public use: east, increasing the concession area by 23,350 m2.  This new area complements the already constructed 70-ml quay and operations area, limiting the work to its south side and allowing access to the Nautical Services Dock on the north side.

The work included the construction of a new breakwater, with berm, formed by an all-in-one core protected on its outer face by a filter and a mantle of natural rockfill.  The general infill, after being consolidated through preloading on land, has been crowned with stone and paved with artificial gravel and HF-4 concrete in deposit areas. The longitudinal and transverse crane rails for the gantry cranes (trastainers) were also built, along with the service networks for supply, medium voltage, lighting, fire, teleprocess and drainage.

The work was concluded in August 2016 for a total cost of 7.1 million euros. 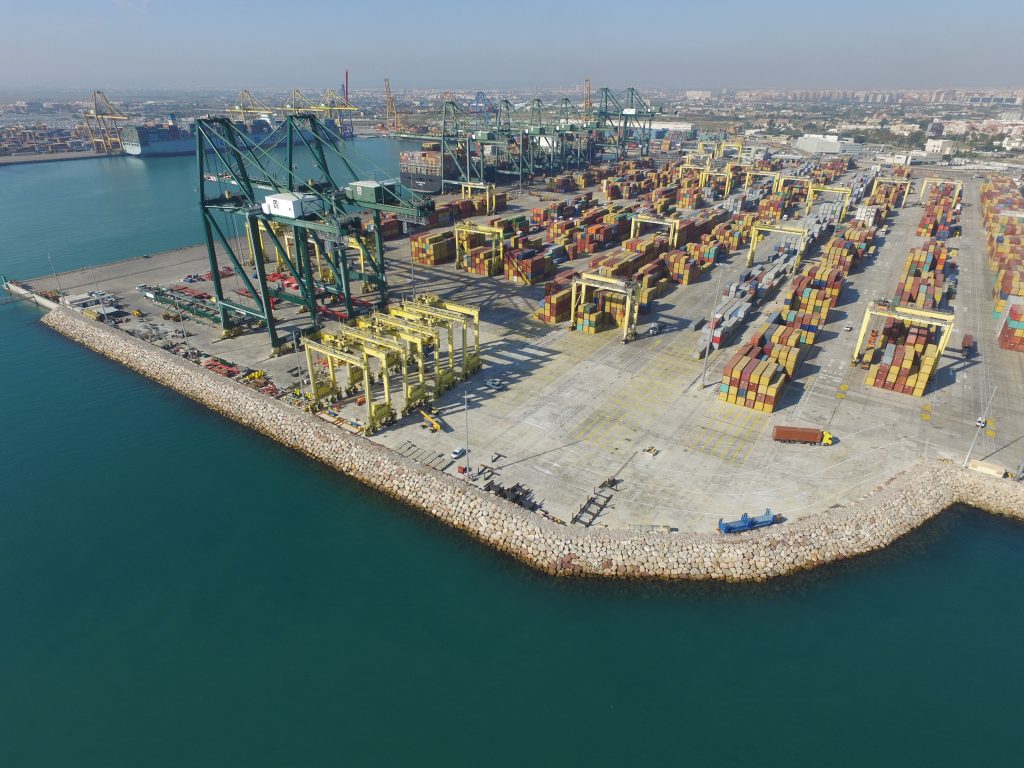 Buildings have been constructed for the Nautical Services Dock, located in the centre 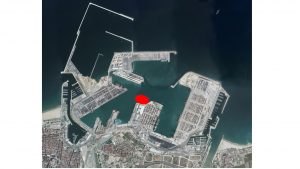 of the Port of Valencia, to house the offices, control tower, storage and workshops for the companies that provide vessel pilotage, mooring, tug boat and underwater operations services.

They form a set of four buildings, with a unitary architectural language, located in front of the quays and berthing jetties of the fleet corresponding to each service.

Since pre-load was already available, the foundation was finished with a concrete slab.  The structure is formed by concrete porticos equidistant from each other with metal pillars for cantilevers; the slabs are unidirectional and the roofs are of a passable inverted type.  The outer coating is formed, depending on the area, by aluminium composite panels and extruded anodized aluminium slats.

Work was completed in February 2016 and its final cost amounted to 3.6 million euros. 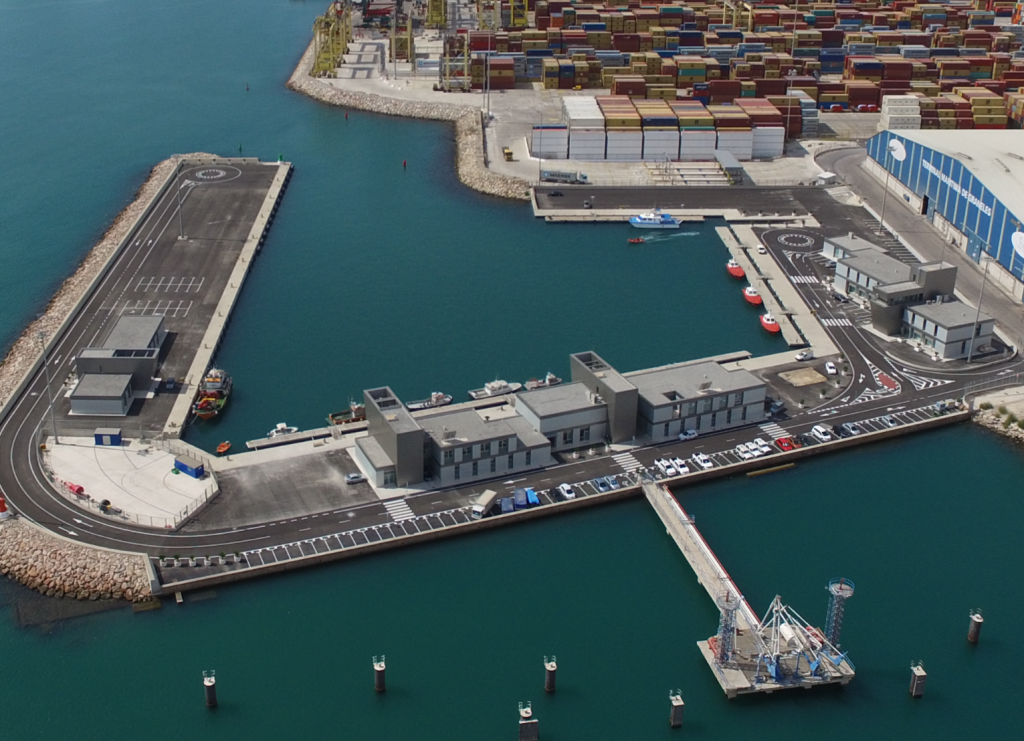 lighthouse (constructed in 1930) inside the port.  The height of the new breakwaters created an area of shadow in the light signal that especially affected coastal navigation.

For this reason, a new lighthouse was planned and built in the outer area of the port, recovering the lost signal.  It is 32 metres in height, visible from all waters within 25 nautical miles.

This lighthouse is the first in the world built entirely from composite materials such as carbon fibre and fibreglass in a polymer matrix. The entire facility is self-sufficient, using renewable energy from 10 photovoltaic panels and a vertical axis wind turbine that powers, among other elements, the main beacon that incorporates a 70-watt LED lamp. For easy recognition, the light has been given a characteristic signal of isolated flashes in 10 second periods: 0.8 seconds of light, 9.2 seconds of darkness.

The final budget of the work amounted to 0.9 million euros and was concluded in June 2015, officially entering service on the night of San Juan.

It is also a finalist for the highly esteemed award from the International Association of Structural and Bridge Engineers (IASBE) which will be presented in September 2017. 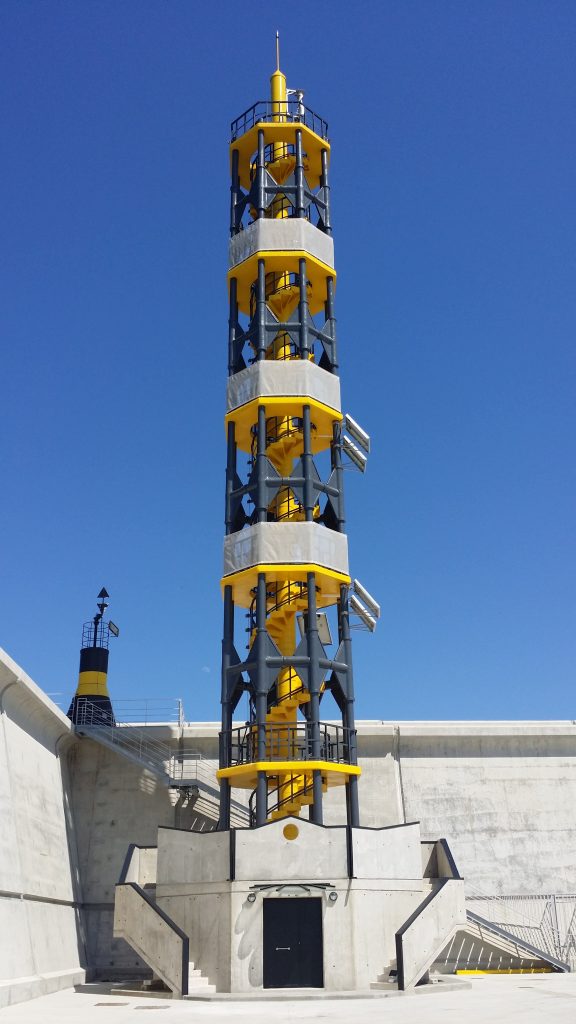 The 2012-2024 Infrastructure, Transport and Housing Plan was intended, among other

purposes, to reinforce intermodal connections.  Within the scope of rail transport, the plans included the adaptation of the basic cargo network to allow the circulation of trains with standard interoperable lengths of 750 m, and the implementation of the standard gauge of 1,435 mm in the Mediterranean Corridor.

The work consisted of increasing the useful length of the rail tracks, which was 450 m, for train compositions of 750 m.  It has a new layout at its south head to allow greater versatility in the terminal’s modes of operation. It included the installation of new mixed-width track sections and diversions as the first phase of the implementation of the standard gauge, interoperable with the port’s internal rail network.  In order to optimize operations, crane rails were also constructed for the gantry cranes (trastainers).

It was also necessary to rearrange the road traffic at the southern end of the rail tracks and to regulate and monitor the special intersections between the rail platforms and the roads, which led to a notable improvement in safety and operational conditions in accessing the container terminal. All affected services were also replaced and restored and the old Zorroza crane was transferred. The works were completed in March 2015 for a total cost of 4.1 million euros. 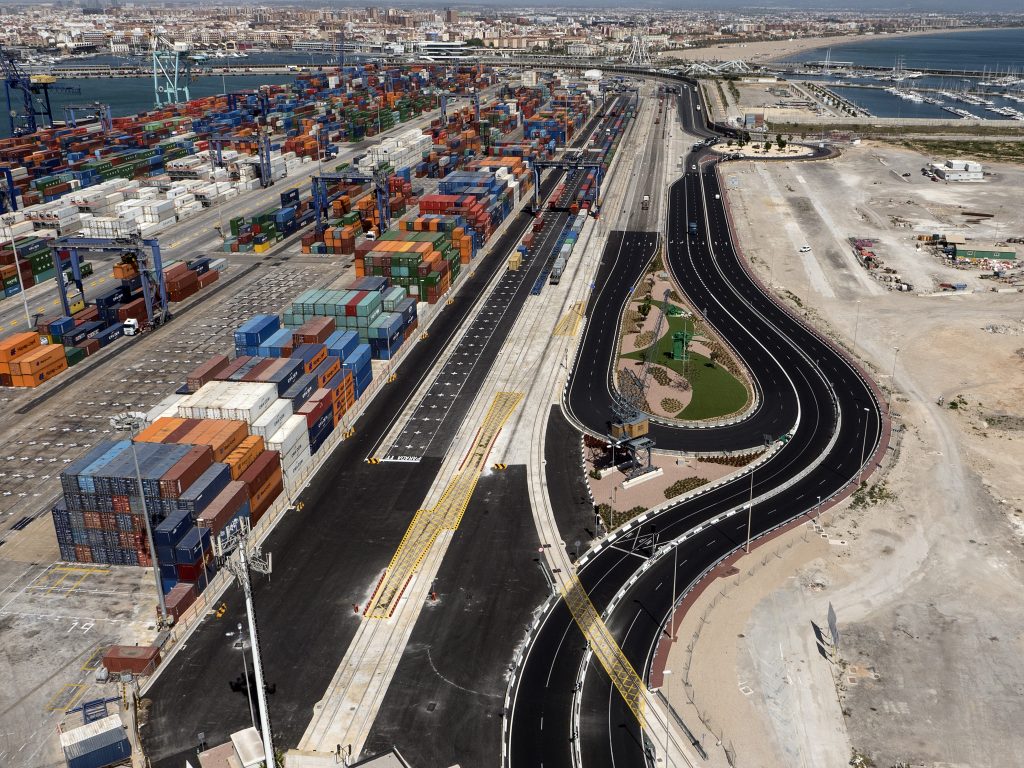 Breakwater construction for the Port of Valencia’s North Extension

With the aim of strengthening the inter-oceanic container port, on one hand, and

handling the increase in cruise traffic, on the other, work was performed to protect the Port of Valencia’s North extension, forming a new outer dock with the mouth facing to the south.

The 250 Ha breakwater will enable the future construction of a cruise terminal and one or more container terminals, ultimately reaching 1.5 million m2 of surface area with capacity for 3.4 million TEUs/year.

The work included the following:

The works, part of several projects, were concluded in October 2012 at a cost of 203.6 million euros.