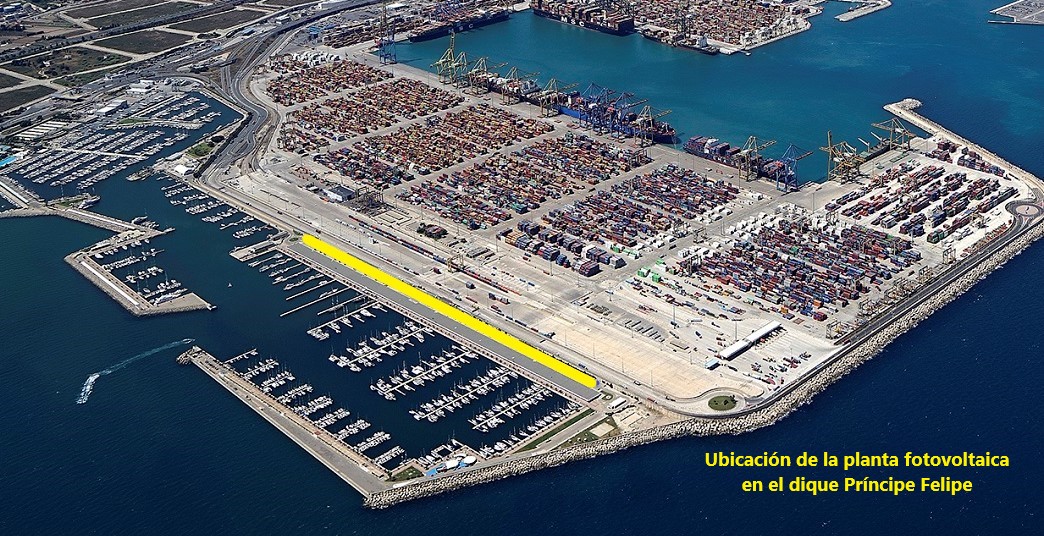 Companies can submit their bids until 5 September at 13.00 hours

This is the first of the solar plants to be installed at the Port of Valencia. The second will be in the automobile silo area of Terminal Valencia Europa and will involve an investment of 16 million euros

In addition, the Port Authority of Valencia has already put out a tender for the photovoltaic installation for the Port of Gandia

This project is financed by the Next Generation funds of the European Union and the Spanish Government’s Recovery, Transformation and Resilience Plan

Valenciaport has put out to tender the construction and maintenance of a photovoltaic energy plant for self-consumption to be located on the Príncipe Felipe dock with a base tender budget of 3,018,594.19 euros, including maintenance for four years. The solar energy panels will occupy a surface area of 6,420 square metres, will have a 30% slope for optimum use and an installed power of 1,461.6 kWp.

This project is financed by the European Union’s Next Generation funds and the Spanish Government’s Recovery, Transformation and Resilience Plan. Companies can submit their bids until 4 September at 13:00. Once awarded, the construction period for the solar plant will be 10 months and the maintenance period will be 50 months.

This installation, which will produce approximately 2,353.00 MWh/year of totally renewable electrical energy, will contribute to the strategic objective designed by the Port Authority of Valencia (PAV) to be an emission neutral port by 2030, twenty years ahead of the objectives set by the European Green Pact. In fact, this will be the first of the solar plants which the Port of Valencia will have, to which will be added the photovoltaic installation project which will be located on the roof of the Valencia Terminal Europa vehicle warehouse and which will involve an investment of 16 million euros.

In addition, last week Valenciaport put out to tender the solar plant for the Port of Gandia which will be in shed 4 on a surface area of 4,500 square metres, with a power of 705 Kwp, a base budget of 1,558,001.2 euros and which will make the Gandia site the first European port to be energy self-sufficient.

“We want to make the Port of Valencia a benchmark in the fight against climate change and decarbonisation with real projects already underway, such as these solar installations, the use of hydrogen in the port area, the electrical substations that will allow the electrical connection of ships while they are docked, the use of alternative fuels such as Liquefied Natural Gas or the project to develop wind energy”, said the president of the PAV, Aurelio Martínez.

To these actions, we must add the commitment to intermodality, the digitalisation of equipment and operations or the design of buildings with energy efficiency criteria that the PAV has been implementing in recent years to transform the Valencian port facilities into an example in the fight against climate change. In this sense, Valenciaport has budgeted 130 million euros to invest in sustainability actions in the coming years.