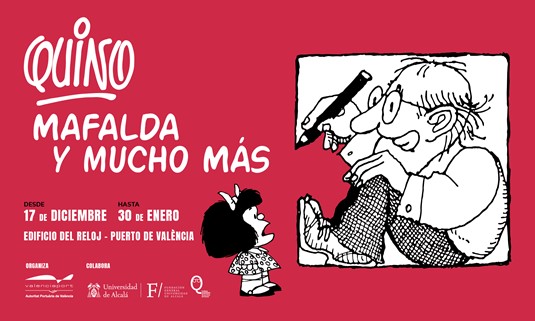 Visitors will be able to enjoy this free exhibition starting on the afternoon of 17 December in the Clock Building.

The free exhibition will remain open to the public until 30 January from 11 a.m. to 6 p.m., weekends and public holidays included.

Visitors to the show “Quino. Mafalda y mucho más” will take a look at the career of the Argentinian artist through more than 200 cartoons, advertising posters and audiovisuals.

The exhibition has QR codes for downloading audio files to mobile phones, a Braille section and an active section for children.

The Clock Building of the Port of València hosts the exhibition “Quino. Mafalda and much more”, an exhibition that traces the career of the cartoonist Joaquín Salvador Lavador Tejón, Quino, father of Mafalda and of an acid and biting humour that often delves into the misery and absurdity of the human condition. The exhibition will open in the afternoon of 17 December and will remain open until 30 January.

With this show, the Port of Valencia continues with its traditional closing of the year and beginning of the new one with the best humour of recognised cartoonists. “Quino. Mafalda y mucho más” can be visited free of charge every day, including weekends and public holidays, between 11.00 and 18.00, in the historic Clock Building, a landmark in the city which in recent years Valenciaport has promoted as a cultural centre for València’s residents and tourists.

Quino’s graphic humour has been recognised and distinguished with multiple awards such as the Prince of Asturias, Doctor Honoris Causa from several universities or the Honorary Professor of Humour from the University of Alcalá. The Port Authority of Valencia, with this exhibition, joins in these tributes to Quino in recognition of his social commitment and his contribution to world culture.

The exhibition will take a look at Quino’s career through more than 200 cartoons, advertising posters, audiovisuals and publications in several languages that will give an account of the international projection of the Argentinean artist’s work. Together with Mafalda and her friends, visitors to this free exhibition will be able to enjoy one of the world icons of graphic humour and her non-conformist and restless vision of society in the cartoons produced between 1964 and 1973.

The exhibition is divided into different sections, such as Quino’s Humour, where his technique and the meaning of his works will be explained. In the section dedicated to Mafalda, whose comic strips were published between 1964 and 1973, visitors will be able to learn about the universe surrounding this world comic icon. In the Homage to Quino section, the awards received by the Argentinian cartoonist and the recognition of society will be on display.

Visitors who come to the Clock Building of the Port of València to see the exhibition “Quino. Mafalda y mucho más” will be able to download explanatory audios to their mobiles via QR code. There will also be a Braille corner for the blind and visually impaired, and a section for children where they can take part in various activities.

Cartoonists in the Clock Building

With the exhibition of Quino, the Clock Building is once again transformed into a point of reflection, which enlivens the critical spirit and reflects the concerns of the citizens through, this time, a little girl, strengthening the port-city link that the APV is committed to and positioning itself as one of the points of reference for cultural activity in Valencia.
Over the last few years, this iconic place has developed a wide range of exhibitions which have mainly dealt with themes related to port activity and which have attracted a large number of visitors.

Over the last year, the “Casal del Port” has paid tribute to three other leading figures in Spanish graphic humour, with exhibitions by Peridis, Forges and Ortifus, which were enjoyed by 7,000, 12,000 and 10,500 visitors, respectively. All the exhibitions have also moved to Sagunto and Gandia after passing through Valencia.