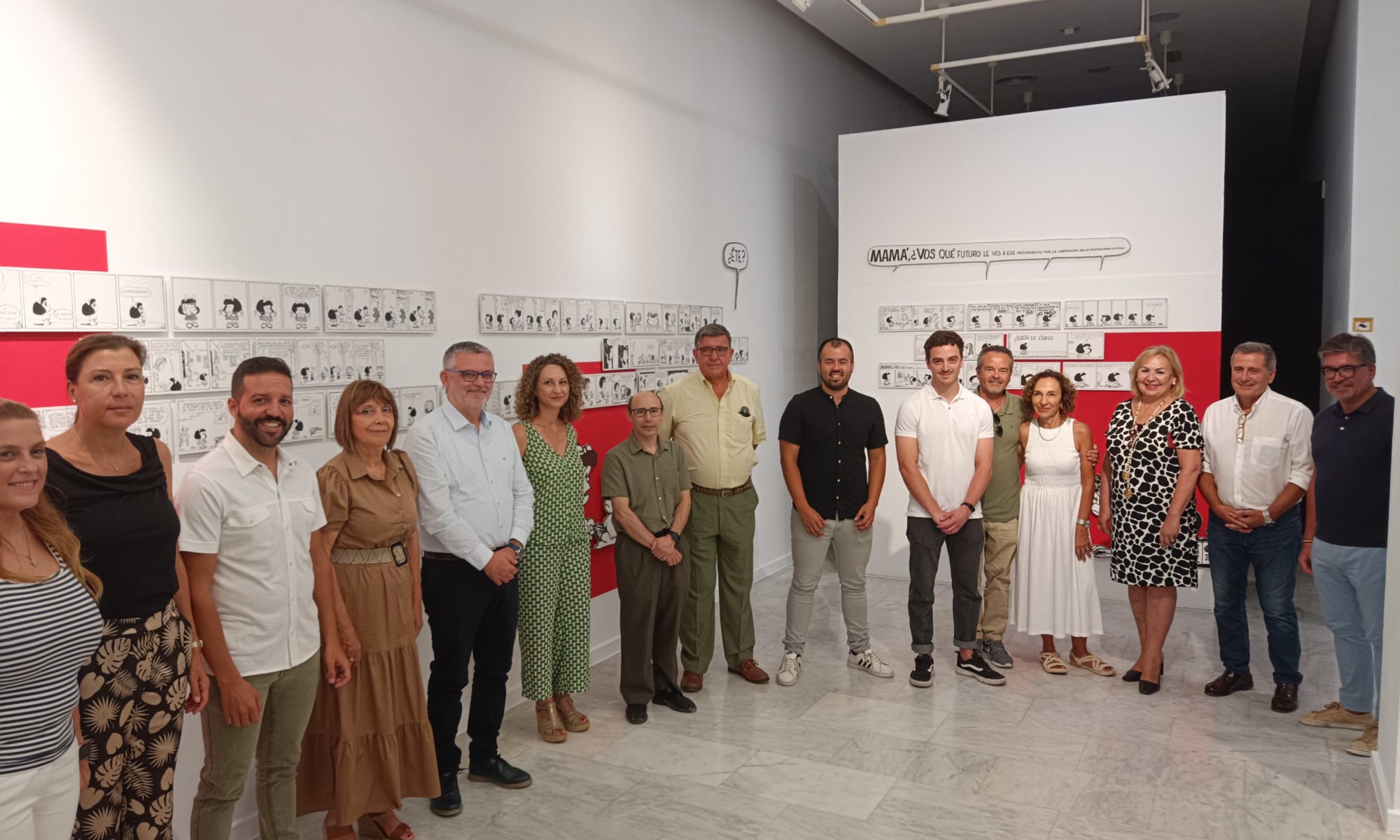 The free exhibition at the Casa de Cultura Marqués de González de Quirós will be open until 31 August from 10.30 am to 2 pm and from 6 pm to 8.30 pm every day except Sundays.

Visitors to the exhibition “Quino. Mafalda y mucho más” (Quino. Mafalda and much more) will take a look at the career of the Argentinian artist through more than 200 cartoons, advertising posters and audiovisuals.

The exhibition has QR codes for downloading audio files to mobile phones, a Braille section and an active section for children.

The humour of Quino through his iconic character, Mafalda, accompanied by her family and friends, opened its doors today in Gandia with the exhibition ‘Quino. Mafalda and much more’, which can be visited free of charge until 31st August at the Casa de Cultura Marqués de González de Quirós.

The opening ceremony of the exhibition was attended by the deputy director of the Port Authority of Valencia (pav), Néstor Martínez, the curator of the exhibition, Ester Medán, the councillor for culture, Nahuel González, Quino’s nephew, Diego Lavado, the great-nephew, Juan Manuel Lavado, and the secretary of the Quevedo Institute of Humour, Juan García, as well as various representatives of the city council.

This exhibition traces the career of the cartoonist Joaquín Salvador Lavador Tejón, Quino, father of Mafalda and of an acid and biting humour that often delves into the misery and absurdity of the human condition. “Quino. Mafalda y mucho más” can be visited free of charge until 31 August every day except Sundays, from 10.30 am to 2 pm and from 6 pm to 8.30 pm. The exhibition is organised by the Port Authority of Valencia (pav) in collaboration with the Quevedo Institute of Humour of the University of Alcalá de Henares and the city council of Gandia.

At the event, the Gandia councillor for culture thanked the Port Authority of Valencia for “its commitment to culture and graphic humour, and its collaboration with the city council. In his work, Quino makes criticisms and reflections that are fully valid and make us empathise with them”. For his part, Martínez pointed out that “the pav is committed to strengthening the city-port relationship through initiatives such as this exhibition which, together with Valenciaport, brings culture and humour to local residents and tourists”.

The exhibition takes a look at Quino’s career through more than 200 cartoons, advertising posters, audiovisuals or publications in various languages which will give an account of the international projection of the Argentinean artist’s work. Together with Mafalda and her friends, visitors to this free exhibition will be able to enjoy one of the world icons of graphic humour and her non-conformist and restless vision of society in the cartoons produced between 1964 and 1973.

Juan García, secretary of the Quevedo Institute of Arts and Humour, thanked the family for “the effort they have made to make this exhibition possible. An exhibition that brings together Quino’s career and his current issues such as the environment and equality”.For his part, Juan Manuel Lavado, Quino’s grandnephew, recognised the importance of this exhibition for them, “for the family it is very important to disseminate Quino’s work, both for those of us who know and love him and for those who are going to get to know him”.

The exhibition is divided into different sections, such as El Humor de Quino (Quino’s Humour), which explains his technique and the meaning of his works. In the part dedicated to Mafalda, whose comic strips were published between 1964 and 1973, visitors can get to know the universe surrounding this world comic icon. In the Homage to Quino section, the awards received by the Argentinian cartoonist and the recognition of society are on display.

Visitors to “Quino. Mafalda y mucho más” can download explanatory audios to their mobile phones via QR code. There is also a Braille corner for the blind and visually impaired, and a section for children where they can take part in various activities.
The exhibition dedicated to Mafalda and her friends was already on display at the Clock Building in the Port of Valencia, where it was visited by more than 25,000 people, and at the facilities of the University of Alcalá de Henares.