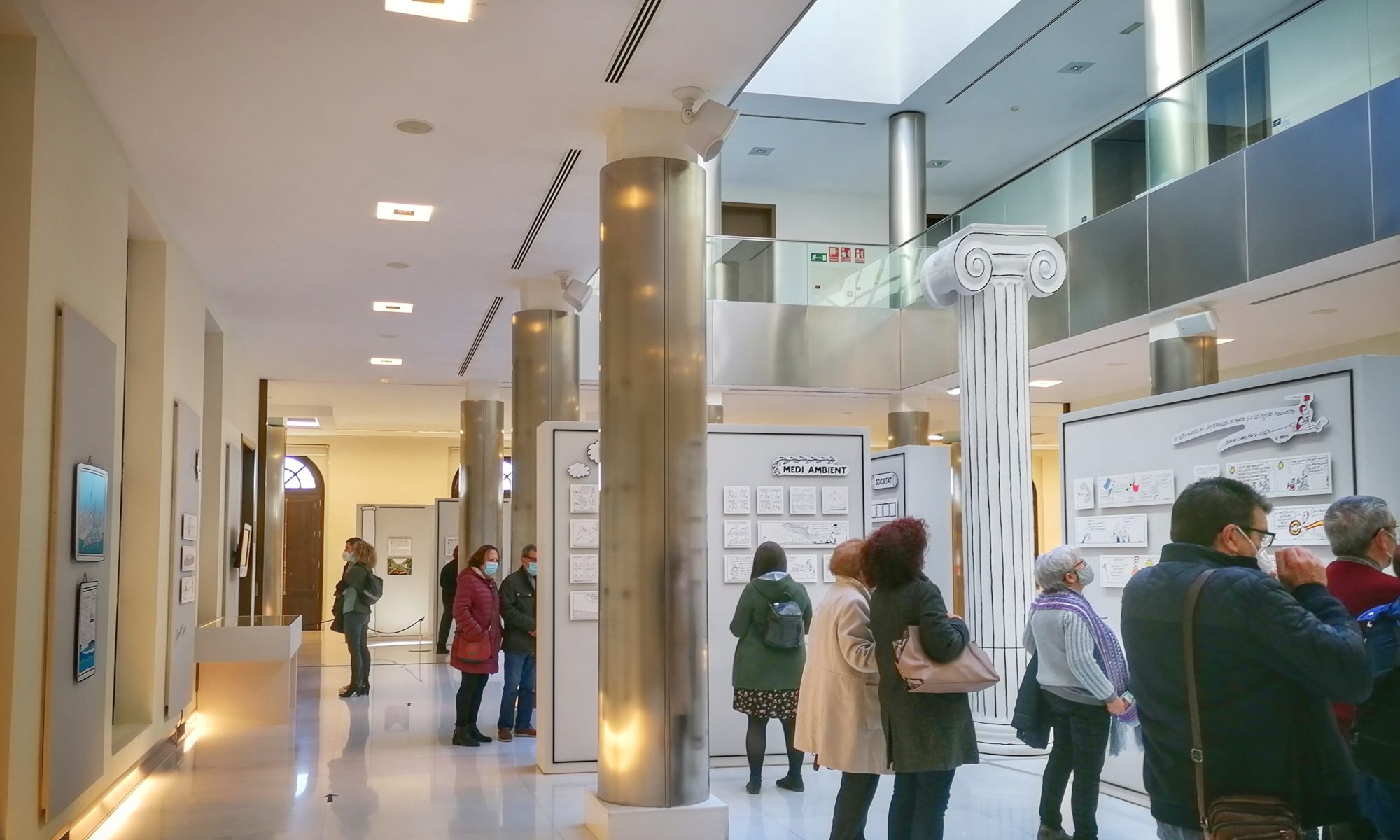 The exhibition of the cartoonist, architect and social entrepreneur, José María Pérez Peridis, exceeds 6,500 visits, in spite of the recommendations and health requirements of the COVID-19.

Peridis is grateful for the attention received in València and compares the Clock Building with the most “emblematic enclaves of Florence or the Verona of Romeo and Juliet”.

In the end, 6,565 people have visited the exhibition that Valenciaport has organised on the professional career of José María Pérez, “Peridis”, which has allowed the graphic humour of the multifaceted illustrator to become known through more than 80 vignettes representative of his wide-ranging work. The exhibition was held in the Clock Building of the Port of Valencia, where visitors were able to find, as Peridis himself defined it, “a beautiful building, comparable to emblematic places in Florence or the Verona of Romeo and Juliet, where light enters from the ceiling to illuminate a room which, in this exhibition, has had Suárez’s column as the axis around which the whole exhibition has revolved”.

Satisfaction in the Port Authority

Peridis and his work, as well as the public response to this cultural event, have combined perfectly with the tastes of Valencia and its people. The Peridis exhibition has been a resounding success, for which the Port Authority of Valencia (APV) warmly congratulates the author and the citizens who have appreciated with their visit the opportunity of the exhibition.  The characters created by Peridis’ strokes and imagination are completed in the minds of the readers and in the observations of the spectators; therefore, having been able to bring together in the most emblematic building of the Port of Valencia so much creativity reinforces the Clock as a cultural container, of emotions and of business events. A combination which reproduces the good climate in the port-city relationship which is currently being experienced in Valencia, with a port which is a leader in traffic, in the generation of employment and a reference point for environmental measures and projects.

From Christmas week until yesterday, Sunday, 6,565 visitors have seen at first hand the work of Peridis as a cartoonist since his beginnings in the Diario SP in 1967, passing through the pages of Informaciones, Cuadernos para el Diálogo and especially in the newspaper El País since its beginnings in 1976.  “The caricature has to express the inner physiognomy of people and events with the maximum economy and the minimum expenditure of personality”, defined Peridis.

At the exhibition, visitors were also able to discover Peridis the architect in his facet as a restorer and disseminator in buildings representative of our cultural heritage, and the social entrepreneur through his project of Employment and Social Entrepreneurship Launchers. “My life has been quite interesting because I have been able to look at it from different points of view, which have been brought together in this exhibition. There are drawings, photographs of buildings that I have rehabilitated, the series on the recovery of the Romanesque that TVE broadcast. Facets with which one entertains oneself to make life more bearable”, said Peridis.

A cultural centre at the service of València

This exhibition, which opened on 17 December and ended on Sunday 31 January, is an initiative of the Port Authority of Valencia (PAV) in collaboration with the Quevedo Institute of the Arts of Humour of the Foundation of the University of Alcalá. An exhibition that consolidates the PAV’s commitment to situate the emblematic Clock Building as one of the benchmarks of València’s cultural activity at the service of its citizens.

In recent years, this iconic place of València has been developing a wide range of exhibitions, mainly on themes related to port activity, which have attracted many visitors. Thus, in addition to the Peridis exhibition, organised by the APV and commissioned by the art historian, Ester Medán, in compliance with all safety protocols by Covid, the “Casal del Port” has paid tribute to two other leading figures in Spanish graphic humour: Forges and Ortifus, which were enjoyed by 12,000 and 10,500 visitors, respectively.

Recently, the Clock Building hosted the exhibition “Imágenes Imborrables” (Indelible Images), on the Valencian society’s view of Covid-19 and created thanks to the photographs sent in by the public, which was visited in person and virtually by more than 7,000 people. An example of commitment among the citizens who live closely the port reality of Valencia, Sagunto and Gandia; who sent for that event more than 2,000 photographs taken by the neighbours of the municipalities related to the Valencian ports.