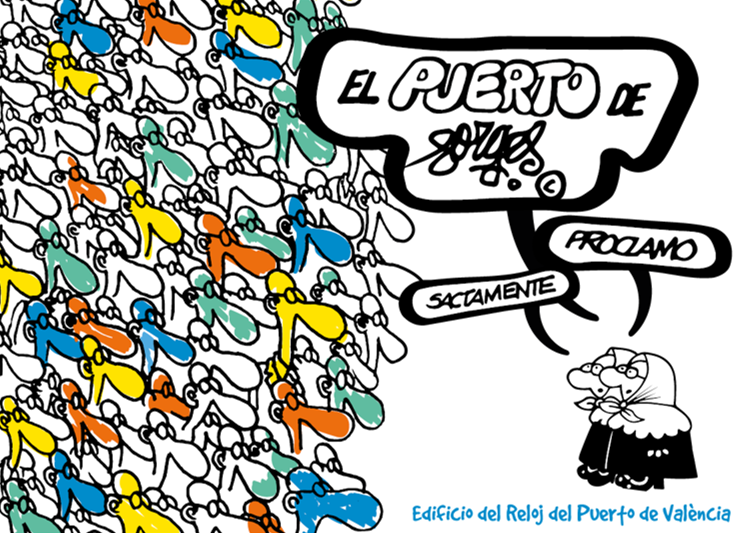 From 20 December to 2 February, the Clock Building in the Port of Valencia hosts an exhibition wich collects 50 years of profession of the well-known graphic humorist.

“El Puerto de Forges” is the tribute of the Port of Valencia to one of the most renowned graphic humorists in our country.

With this sample, which is done in collaboration with the Instituto Quevedo de las Artes del Humor of the University of Alcalá de Henares, the Edificio del Reloj stands as the cultural exhibition centre of Valencia.

Valencia, 13 December 2019.- On December the 20th, the Clock Building at the Port of Valencia will open the exhibition “The Port of Forges”. The exhibition, which will be open to the public until 2 February, looks back at the economic and social changes and transformations experienced in Spain over the last 50 years through the vignettes of the renowned cartoonist Antonio Fraguas, “Forges”. Organised by the Port Authority of Valencia (PAV), in collaboration with the Quevedo Institute of the Arts of Humour of the University of Alcalá de Henares, this exhibition makes the Clock Building one of the cultural centres of reference in the city of Valencia.

Conceived as a tribute from the Port of Valencia to one of the most renowned graphic comedians in our country, the Port of Forges is, in the words of the president of the PAV, Aurelio Martínez, the port of Valencia, the port of Gandía and that of Sagunto. It is a show with which from the Port Authority of Valencia we have wanted to review 50 years of creativity, intellectual brilliance of good humour, satire and tenderness of one of the great creators and drafters of the Spanish reality, since the 70s.

Located on the main floor of the Clock Building in the port of Valencia, the exhibition is structured in 5 thematic blocks that deal with Equality between men and women; Culture; Environment; Social aspects, and finally, the Sea. “The Port of Forges” also hosts a more intimate and personal part that includes a tribute from his fellow Valencians. The exhibition includes the emblematic characters Blasillo, Mariano y Concha, and Cosma y Blasa, among others.

With this last exhibition, Valenciaport once again uses graphic humour as the main reason for a show, after the success of last year’s exhibition with Ortifus. For its preparation, the port of Forges has counted on the collaboration of the family of Forges and the Quevedo Institute of Humor Arts of the University of Alcalá de Henares, a center that was run for many years by Antonio Fraguas himself.

The Clock Building as a Cultural Center

In recent years, the Port Authority of Valencia has wanted to recover the role that the Clock Building had long ago as a cultural center to bring citizens closer to this emblematic place of the port and the city. To this end, it has developed a wide range of exhibits that have included, mainly, topics related to port activity and that has had a significant audience.

In total, more than 25,000 people have approached to visit some of the five exhibitions held so far in the Clock Building. In particular, the exhibition “Maquetes i Mestres d’’Aixà del Port de València”, received the visit of 5,000 people who wanted to know the historical evolution of the port of Valencia through images and models; the same figure obtained by the exhibition La Dársena Histórica del Port de València: Progrés i Modernitat. For its part, the commemorative exhibition of the milestone of the 5 million container “Això és TEU” [5,000,000], received in just 6 days more than 3,000 visits. With regard to the exhibition about the trajectory of Ortifus Ortifus Ortifus to the sea-intim[ reached 10,500 visitors. And the most recent exhibition, organized to commemorate World Environment Day, received more than 1,500 visitors in just five days.