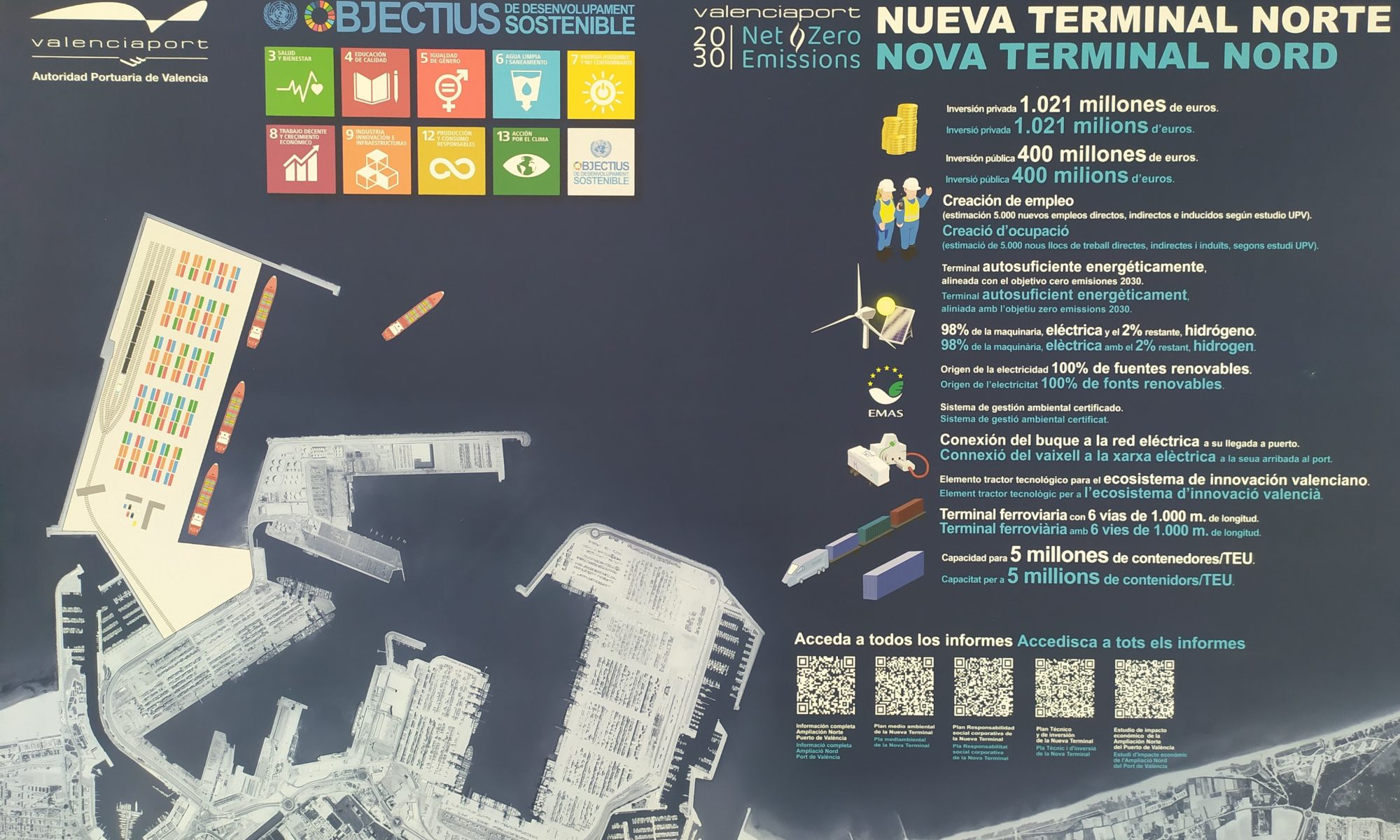 The exhibition “Un món a bon port”, which can be visited until 21 October in the Clock Building, includes a panel and explanatory video on the 9 SDGs included in this action.

The activity of the new terminal will comply with nine SDGs. It will be the most modern and sustainable terminal in the world, will attract more than 1,000 million in private investment and will generate 5,000 jobs.

The new container terminal to be located in the sheltered waters of the north dock of the Port of Valencia extension, an infrastructure built in 2012, will meet nine Sustainable Development Goals (SDGs). It will be the most modern and sustainable terminal in the world, a model for the environment, the origin of the electricity will be 100% from renewable sources, it will allow the supply of electricity to ships in port and it will be committed to the railway. This infrastructure will attract a private investment of 1,021 million Euro, will generate 5,000 jobs and will have a technological driving force for the Valencian innovation ecosystem.

The exhibition “Un món a bon port”, which is open free of charge until 21 October in the Clock Building of the Port of València, includes a panel and explanatory video on the characteristics of the new container terminal and its commitment to the new SDGs. Specifically, the activity of the new terminal will comply with the SDGs: Health and Wellbeing; Quality Education; Gender Equality; Clean Water and Sanitation; Affordable and Clean Energy; Decent Work and Economic Growth; Industry, Innovation and Infrastructure; Responsible Production and Consumption; Climate Action.

Thus, in this explanatory set about this infrastructure that will be located inside the breakwater of the northern extension, visitors can download QR codes that provide all the information about the new northern container terminal of the Port of Valencia: its impact, environmental studies, characteristics, etc. A project that will comply with the four basic pillars of Ecological Transition, Digital Transformation, Social and Territorial Cohesion and Gender Equality.

Thus, the new north container terminal will be aligned with the Valenciaport 2030 objective, zero emissions. According to the project presented by TIL, it will have a railway station with 6 tracks of 1,000 m long and capacity to move 305,000 TEUs/year, 98% of the energy required for the operation of the terminal will be electric from renewable sources and the remaining 2% of the machinery is planned to use green hydrogen. At all times, the origin of the electricity will be 100% from renewable sources, it will have an environmental management system at the highest level (EMAS certification) and the highest environmental requirements in the construction and operation phases. In addition, ships operating in this enclave will switch off engines and connect to the electricity grid on arrival at the port.

The total employment generated by Valenciaport when the terminal is active will increase from 38,866 to more than 44,000 jobs and will create more than 5,000 new jobs in the area around the Port of Valencia, including direct, indirect and induced jobs. Quality employment which will be supported by Valencian entities for research and training, with an effective equality strategy which will favour the reconciliation of personal, work and family life and which will improve the health and safety standards of port operations.

The new container terminal will involve an investment of more than 1,400 million euros, of which more than 1,000 million are private initiatives, which will have a direct effect of more than 1,200 million euros on the productive fabric of the Valencia Region. The terminal will be a technological driving force for the Valencian innovation ecosystem and will promote the adoption of improvements and the creation of synergies with other companies in its area of influence.