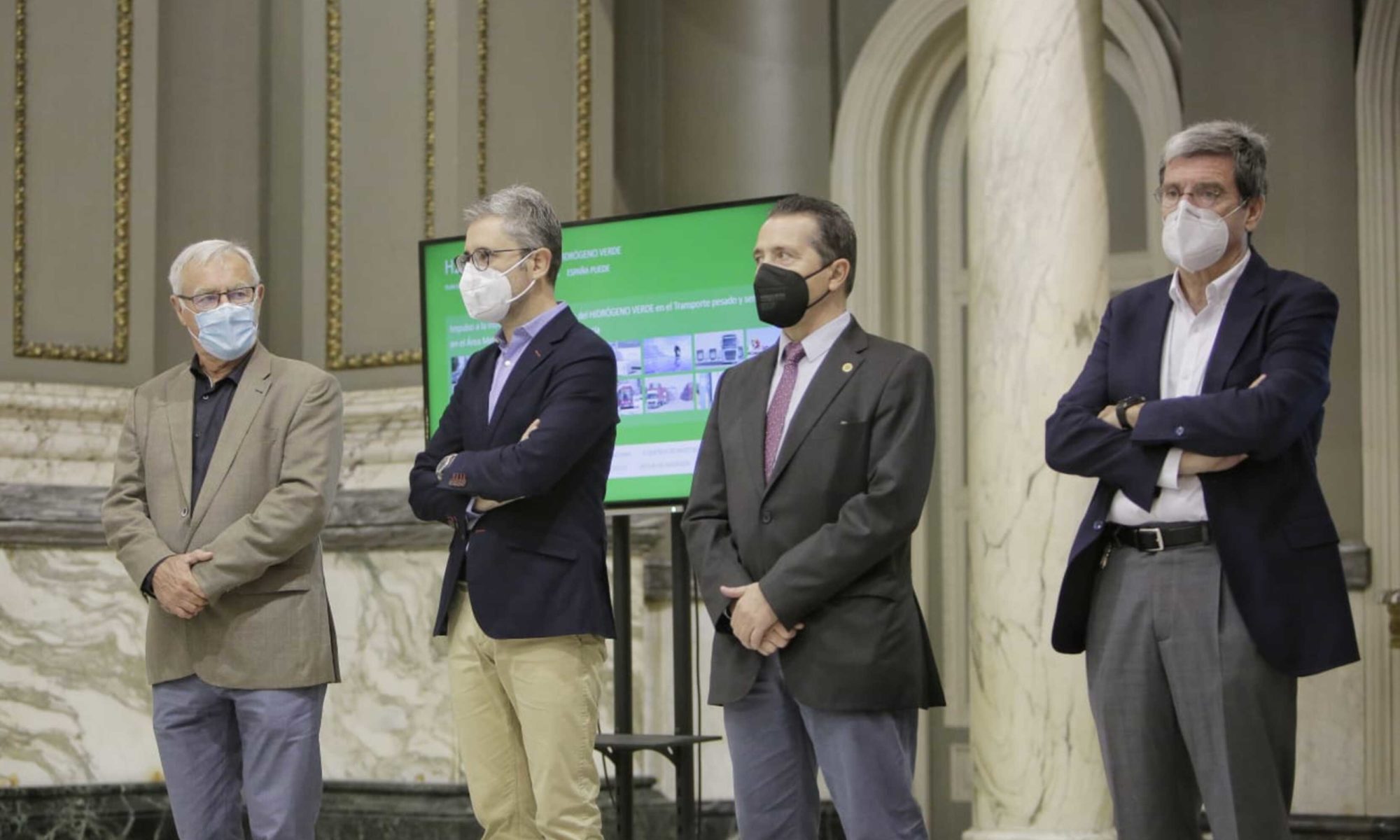 Valenciaport, Valencia City Council, Universitat Politécnica de València and Generalitat Valenciana will go hand in hand to promote hydrogen in influence of the city of València.

The H2VLC Valencia Hydrogen Valley project, in which more than 40 companies, organisations and institutions are participating to promote this energy in the transport and logistics sector, was presented today at Valencia City Hall.

The president of the Port Authority of Valencia explained the real and firm commitment of Valenciaport 2030 zero emissions to be 20 years ahead of the European objectives of decarbonisation and the fight against climate change.

The president of the Port Authority of Valencia (PAV) and the Valenciaport Foundation, Aurelio Martínez, said during the presentation of the H2VLC Valencia Green Hydrogen Valley project in the Glass Hall of Valencia City Council that “Valenciaport is a pioneer in Europe in the use of hydrogen in port operations through the H2Ports project, on which we have been working for several years,  and for which we have received the international Green4Sea award”.

The president of the PAV explained that “Valenciaport has been committed for many years to issues of decarbonisation, balance and sustainability and a good proof of this is that we have all the environmental and energy certifications, we measure and monitor noise levels, water and air quality”. In this sense, Martínez added that “the Port of Valencia has two air quality measurement booths with the latest technology that record eight elements of different gases and particles to report the data in real time and available on the Generalitat’s network. These control booths have never been disconnected since they were installed and allow us to know the air quality around the port”.

In 2008,” continued the president of the PAV, “we began calculating the carbon footprint and since then the footprint has been reduced by 30% while in the same period traffic has increased by 42%. Our commitment is obvious and this is confirmed by the data, but we want to be more ambitious with the Valenciaport 2030, zero emissions project.  We have research mechanisms and economic resources to implement projects with alternative and green energies that will allow us to be 20 years ahead of the European objectives of decarbonisation and the fight against climate change”.

The president of the PAV said during the presentation of H2VLC Valencia Hydrogen Valley that “this energy is sure to play a key role in a decarbonised and emission-free economy, but there is still a lot of work and investment to be done and also a lot to learn, and there is no better way to do it than daring to be pioneers and take the first steps”. For Martínez “an initiative such as H2VLC could be key for the future and the commitment to sustainable growth, and the Port has the duty and, above all, the will to do its bit and collaborate with the region, the city and the rest of the social and economic agents to achieve this”.

Valencia Hydrogen Valley is promoted by the Valencia City Council, the Generalitat Valenciana, the Universitat Politènica de València and the PAV, together with the Valenciaport Foundation, to coordinate, create synergies and promote research into green hydrogen in the transport and logistics sector in Valencia and its metropolitan area. This project involves more than 30 companies and SMEs, five research centres, eight public entities, three spin-offs, 13 investment initiatives and eight technological development projects that mobilise more than 160 million euros of investment. The H2VLC project will be coordinated from the Las Naves innovation centre and will be eligible for financial support from the Spanish government’s Recovery, Transformation and Resilience Plan.

H2VLC is articulated around 21 projects, ranging from the construction of specific infrastructures for the generation and dispensing of green hydrogen for transport, to the acquisition of trucks, buses, vans, urban service vehicles and industrial logistics transport vehicles powered by green hydrogen. It includes the development and production of a hydrogen tram, as well as commercial technologies for the generation, consumption and integrated management of the green hydrogen value chain, with projects to be carried out by research centres of the UPV and the UV, in collaboration with different companies in the Valencia Region.

More than 40 Valencian companies, institutions and entities have already joined the initiative, including Consum, Aguas de València, BP, Balearia, EMT, Stadler, the Gimeno Group, Pavasal, FGV, DAM, ETRA, Transvia, the Alonso Group, the Sociedad de Agricultores de la Vega, and the Valencian Federation of Transport and Logistics Entrepreneurs (FVET). It also has the support of three reference research centres of the UPV -the CMT-Thermal Engines Institute, the Institute of Chemical Technology (UPV-CSIC) and the Institute of Energy Engineering-, another one of the University of Valencia -the Institute of Molecular Science, ICMOL-, and the Technological Institute of Energy (ITE).

The European project that will allow Valencia and its port to work and move port machinery with hydrogen is called “H2PORTS Implementing Fuel Cells and Hydrogen Technologies in Ports” coordinated by the Valenciaport Foundation, in close collaboration with the Port Authority of Valencia, and financed by the Fuel Cell and Hydrogen Joint Undertaking (FCH JU) programme of the European Union, has as its main objective to test and validate hydrogen technologies on port machinery that will provide applicable and real solutions without affecting the performance and safety of port operations and producing zero local emissions.