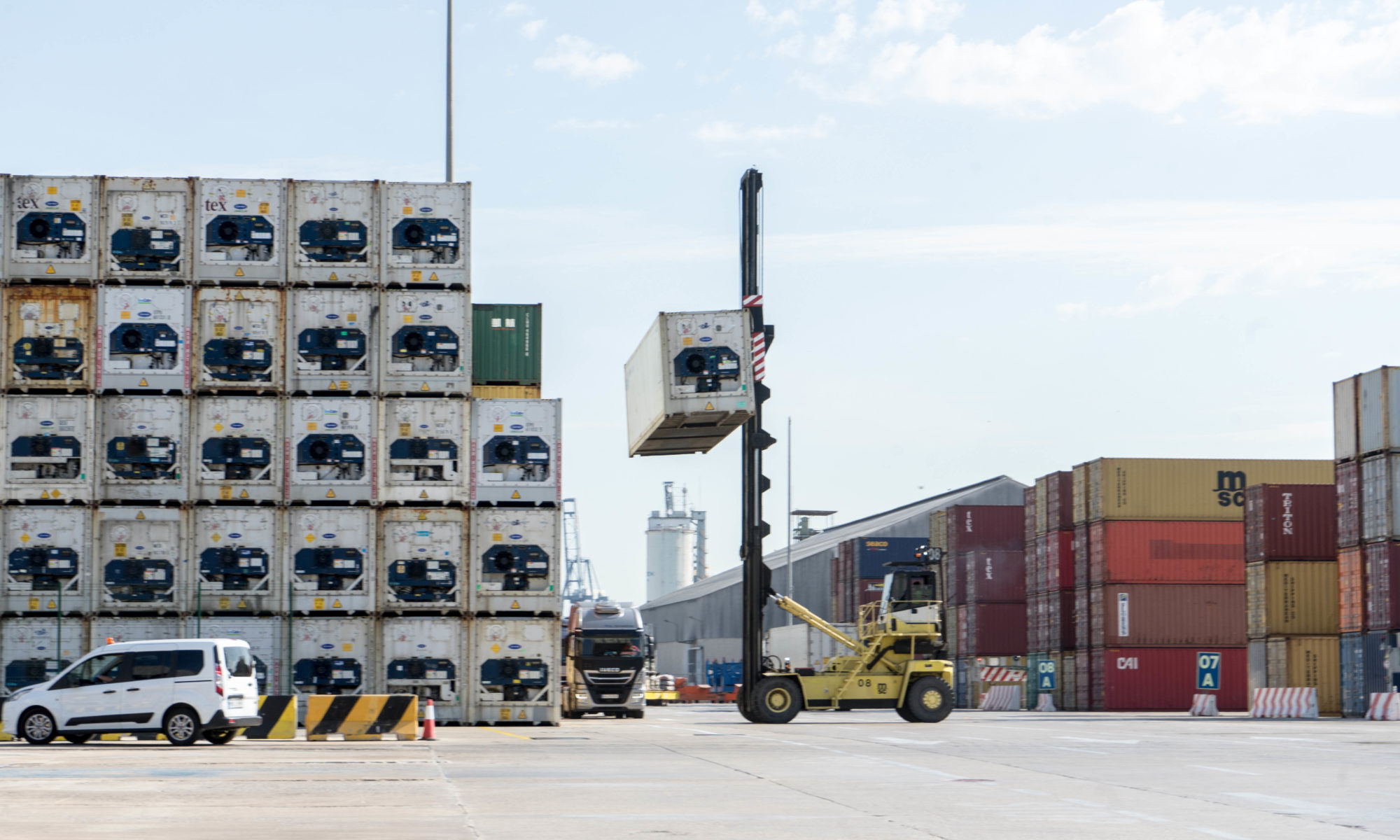 The Asian continent accounts for the vast majority of the market. 8 out of every 10 tonnes of pork leaving the docks of Valenciaport are destined for China.

Spanish pork leaves the docks of the Port of Valencia for countries as diverse as New Zealand, South Africa, Canada, Kenya, Chile, Gabon and Reunion Island.

The connectivity of the Valencian precinct with some of the 1,000 ports with which it is connected facilitates the export work of the business fabric, crucial for the future viability of many companies and jobs.

Valenciaport has 3,000 connections for refrigerated containers as well as refrigerated warehouses for perishable products.

Every year thousands of containers of pork leave the Port of València to be consumed in North America, Asia, Oceania, Europe or South America… up to a total of 75 countries, from giants such as China, to remote islands in the Pacific, passing through areas in the heart of Africa. Today, exports represent an important activity for countries and their economies. In a context marked by economic uncertainty and competitiveness, foreign sales are a driving force for the generation of wealth and employment and an insurance for the future viability of many companies. A value that the Spanish livestock sector is exploiting with the support of the Port of València, an ally of exporting companies so that their products can reach any destination.

Containers loaded with “Made in Spain” pork leave the docks of the Port of Valencia for all parts of the world. According to the latest data from the Statistical Bulletin of the Port Authority of Valencia (PAV), in the first half of the year, a total of 174,591 tonnes of Spanish pork meat left the Valencian port area for 75 countries on the five inhabited continents.

As a strategic partner of the sector, the Valenciaport port community is committed year after year to providing the necessary services and instruments to facilitate the movement of both non-perishable and perishable agri-foodstuffs. In the latter case, refrigerated maritime transport is carried out in reefer containers, which are equipped with a refrigerated engine that allows the transport of temperature-sensitive goods such as meat. Valenciaport has 3,000 connections for this type of container as well as refrigerated warehouses for these products.

More than 5 million containers pass through Valenciaport’s terminals every year, to and from 1,000 ports in 168 countries and with a wide variety of goods. This connectivity means that an exporter of pork from Castilla-La Mancha, Murcia, Valencia, Castilla León or Aragon can send a container to Reunion Island in the Indian Ocean to the east of Madagascar with 145,000 inhabitants or to the paradise island of Society Island in the South Pacific so that it can be tasted by some of its 200,000 inhabitants, or Spanish products can be consumed in any corner of China, Japan or South Korea.

Ninety-five percent of sales are destined for the Asian market, with China accounting for 79% of the pork leaving the docks of the Port of Valencia. Specifically, in the first half of the year, 137,721 tonnes of pork were loaded for the Asian giant. Next comes Japan with 5% of the traffic, followed by South Korea with 4.3%, Singapore with 3.5% and the Philippines with 2.9%.

But Spanish pork is also found, thanks to the connectivity of Valenciaport, in markets as diverse as New Zealand, Canada, South Africa, Reunion Island, Kenya, Ivory Coast, Namibia, Mexico, United Arab Emirates, Cuba, Gabon, Congo, Sweden, USA or the Society Island, among others. Thus, for example, 1,072 tonnes have been exported to Canada, 404 to the Ivory Coast and 358 to Kenya. More “exotic” destinations include 389 tonnes of pork to Reunion Island in the Indian Ocean, 76 tonnes to Society Island in the South Pacific and 37 tonnes to Martinique in the Caribbean.

The Port of València has thus become the main ally of thousands of exporting companies in its area of influence which can sell their products by sea transport to large markets such as North America or Asia, but at the same time reach remote islands in the Pacific. Valenciaport, as a logistics benchmark for the whole of Spain, continues to improve its infrastructures and services in order to respond to the needs of the import/export activity of companies, and to the increase in maritime traffic in the coming years.