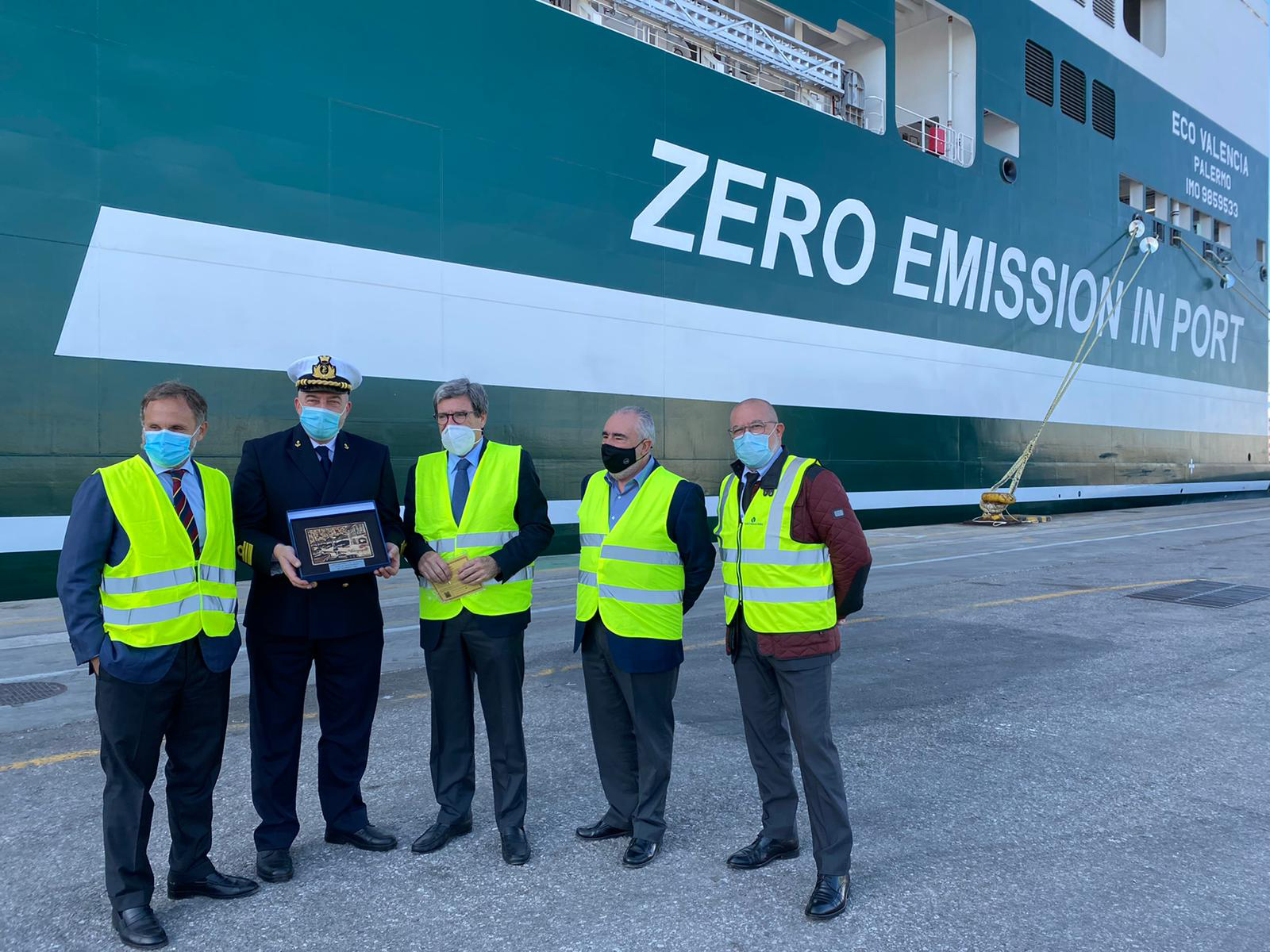 The Port of Valencia receives the Eco Valencia, a ship that guarantees zero emissions during the stop at the docks thanks to the electricity stored by lithium batteries that are recharged during navigation and to the photovoltaic panels

Aurelio Martínez highlights Valenciaport’s eco-efficient infrastructures such as Grimaldi’s car silo, which will have photovoltaic panels on its roof

The President of the Port Authority of Valencia (PAV), Aurelio Martínez, and the Managing Director of the Grimaldi, Group in Spain, Mario Massarotti, have received the Eco Valencia, the first hybrid ship of the Italian company that guarantees zero emissions in port. The president of the APV pointed out that “Grimaldi’s Eco Valencia is the most ecological line of ships that we are always defending in Valenciaport, a ship that is not going to make any emissions in the port because it has lithium batteries that recharge it during navigation. These new generation ships are in line with our sustainable commitment, which is what we want in the future for all the ships that arrive in Valencia”.

Aurelio Martinez, together with the general director of the PAV, Francesc Sánchez and Mario Massarotti, participated in the reception of the Eco Valencia, the first of the 12 hybrid ships of the Grimaldi shipping company of the Green Generation class (GG5G) which is berthed in the Port of Valencia. Martinez presented the commander of the Italian ship, Domenico Gianfelice, with a “socarrat”, the Valencian baked clay tile decorated with marine elements that is awarded in Valenciaport in the exchange of gifts that take place when a ship arrives in port for the first time.

The president of the PAV pointed out that “Valenciaport together with the companies that operate in the Port are working on sustainable facilities. We have an example in the car silo recently inaugurated by Grimaldi, which is the largest in Spain, because the spirit of the company is to increase car traffic and this is a clear commitment by the company to Valencia”, said Aurelio Martínez. “Furthermore,” he continued, “we reached an agreement so that the roof of the building will be covered with photovoltaic panels that will allow a significant percentage of green energy to be generated. This project is in line with the commitment of both organisations to sustainable projects”.

In this sense, Mario Massarotti pointed out that “we are going to have zero emissions in the operations in the Port of Valencia, a novelty of which we are very proud”. The Managing Director of the Grimaldi Group in Spain explained that the Eco Valencia “is a unique ship and a clear commitment by our company to sustainability and zero emissions in the port, with a loading capacity double that of previous ships but with the same fuel consumption and various technological solutions that improve the ship’s emissions”. Massarotti thanked “clients, transporters and car companies for the work developed over many years in this project which shows that sustainable transport is something very important”.

The ship is the largest ro-ro unit in the world dedicated to short sea shipping and can carry 7,800 linear metres of roll-on-roll-off goods, equivalent to about 500 trailers. The loading capacity of its garages is twice that of the largest ships currently operated by the Neapolitan group; however, the new ship consumes the same amount of fuel at the same speed. This means double efficiency in terms of emissions per tonne transported.

The new GG5G class ships are equipped with state-of-the-art electronically controlled engines, and use fossil fuels in navigation and electricity while parked in port, guaranteeing “Zero Emission in Port®”. During the stop at the quay, the energy needs of the activities on board can be met thanks to the electricity stored by lithium batteries that are recharged during navigation thanks to shaft generators and 600 square metres of solar panels. On board the GG5G ships, exhaust gas purification systems are also installed to reduce sulphur and particle emissions.

The Italian Naval Registry (RINA) has awarded Eco Valencia the “Green Plus” class, the highest level RINA certification in the field of environmental sustainability. The “Green Plus” recognises the design solutions, on-board systems and operating procedures implemented, both during the construction phase and during the operational phase. The aim is to improve environmental performance beyond the minimum levels required by international standards.

Eco Valencia is the first of the 12 ships of the GG5G class that the Grimaldi Group has ordered from the Chinese shipyard Jinling. It is 238 metres long and 34 metres wide, has a gross tonnage of 67,311 tonnes and a cruising speed of 20.8 knots. Of the 12 units, nine will be deployed in the Mediterranean Sea and another three will be operated by the Finnlines company of the Grimaldi Group in Northern Europe. The Eco Valencia will be in service in the Mediterranean between Italy and Spain, calling regularly at the ports of Livorno, Savona, Barcelona and Valencia. In the coming weeks its twin, the Eco Barcelona, will be added.