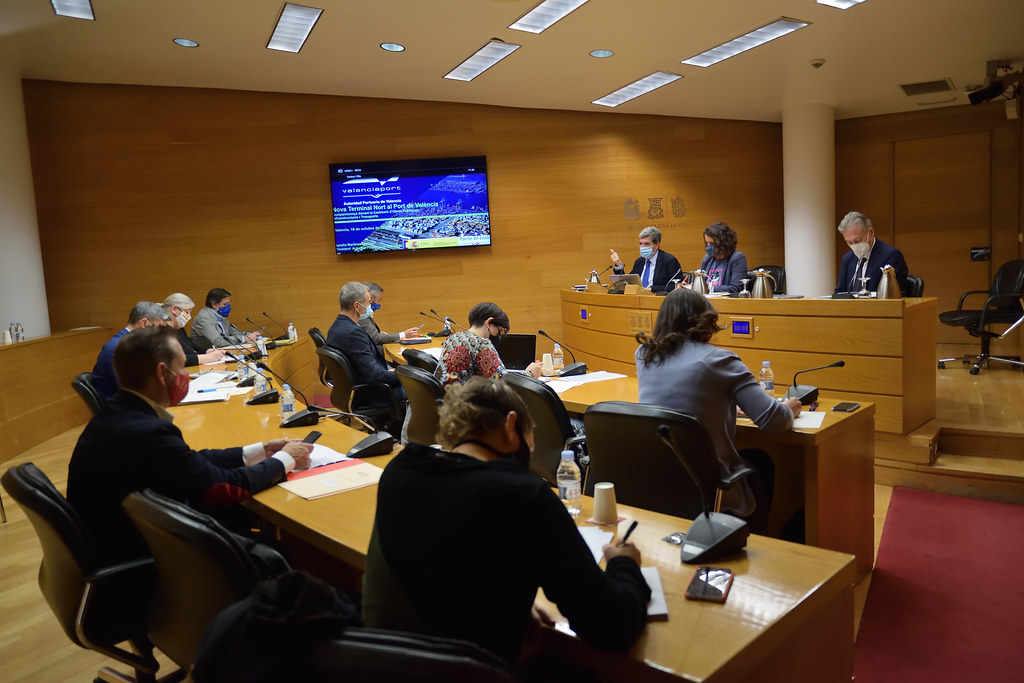 “Valencia will have the most efficient, competitive and environmentally friendly terminal”

València, October 16th, 2020.- The President of the Port Authority of Valencia (PAV), Aurelio Martínez, has indicated to the Public Works, Infrastructures and Transport Commission of Les Corts Valencianes (Valencian Parliament) that “the new North Terminal of the Port of Valencia is a clear example of infrastructure that makes sustainability and growth compatible. The new terminal is going to be the most environmentally advanced in the world, it will be fully electrified which will minimise CO2 emissions by supplying electricity to ships or reducing current CO2 emissions by 98%, while at the same time creating new qualified jobs and being a driving force in the economic activity of the Valencia Region and Spain, which will enable us to continue being a strategic port hub on a global level”.

During his appearance, Martínez explained that the North Terminal of the Port of Valencia is necessary because “international trade will continue to grow and produce commercial exchanges, where maritime transport is the most competitive and environmentally efficient” and he gave an example, “to replace a ship from Valencia to China, 240 trains are needed, which are 10 times more contaminating per navigable mile than a ship. The railway is going to be a key element in the future and we must continue to promote it, but it cannot compete with the ship in the transport of goods”.  He also indicated that this infrastructure is essential because “the port of Valencia is already at 73% of its maximum capacity, we want to continue being a hub port, not to lose traffic, and to be able to fulfil our objectives and commitments to society, there are investors who want to bet on our port, investments in this infrastructure have very long maturation periods, and because the expansion has already been carried out”.

In this sense, he pointed out that “to continue to be competitive, we must grow, and to do so, the new terminals must be efficient in terms of employment and respectful of the environment, betting on clean energies or a greater presence of the railway, among others. And a clear example will be the new North Terminal”.

The President of the PAV has indicated that the Strategic Plan 2001-2015 drawn up by the Port Authority of Valencia contemplated an extension of the infrastructures of the Port of Valencia in its northern zone which was approved in the framework of the obligatory procedure to undertake the extension, in July 2006 by the State Port Governing Council which approved the Master Plan for the Infrastructures of the Port of Valencia.  The works included in the mentioned Master Plan were submitted to the current environmental procedure, obtaining a favourable Environmental Impact Declaration (EID).

“After obtaining the favourable EIS, the works to shelter the Northern Enlargement were undertaken, which began in June 2008 and ended in February 2012. The total amount of the works was 204 million euros, of which 74 million were subsidised by the European Cohesion Funds”, he said.

Aurelio Martinez explained that “the works already started on the port comply with the assumptions that are requested to make a new EIS: when there is a significant increase in emissions into the atmosphere, when there is an increase in the generation of waste, when there is an increase in the dumping into the waterways or an increase in the use of public resources.  In no case is the new construction of the North Terminal among these reasons”. For this reason, the President of the PAV has stressed that the 2007 EIS “is valid and in force” as it does not affect the modifications to the 2019 preliminary project which do not have an adverse effect on the inner dock as they are made in inland waters, the extension of the breakwater will not be carried out, the dredging work on the entrance channel will not be carried out and the materials for filling will be strictly in accordance with the sources contemplated in the current 2007 EIS.

With regard to the allegations, the president of the PAV has indicated that a total of 216 have been counted. “They have all been answered in writing in an exhaustive manner. Once the State Ports and the Board of Directors of the PAV approve the modifications to the 2018 preliminary project, they will be reported. We are a totally transparent port that has to be compatible with the confidentiality of the companies involved from which permission has to be requested”.

Impact on the economy and employment

During his speech, the president of the PAV pointed out that “the new North Terminal is the most important work for the Valencia Region in the coming years. If we wish to continue to be a strategic port hub on a world level and to stimulate economic activity, the Region of Valencia cannot afford not to carry out this extension”. According to the studies carried out, when the new terminal is operational, the economic activity of the Port of Valencia will double, generating up to 80 000 jobs (twice as many as at present) and a gross added value of nearly 6 billion euros (three times more than at present).

During his appearance, Martinez explained that “the new North Terminal will represent an investment of 1.4 billion euros – 400 public and 1 000 private – with an important economic impact both during the construction phase and when it becomes operational”. The President concluded his speech by emphasising that “Valencia will have the most modern terminal in the world, the most efficient, which will allow greater traffic attraction, with a firm commitment to the railway, respecting the environment, generating qualified employment and fulfilling the mission of improving the competitiveness of the business fabric of the Valencian Community and our hinterland. In short, making growth and sustainability compatible”.

Finally, the president of the PAV has invited all the parliamentary groups to “visit the port and expand on all those aspects of the new North Terminal or any other Valenciaport project”.