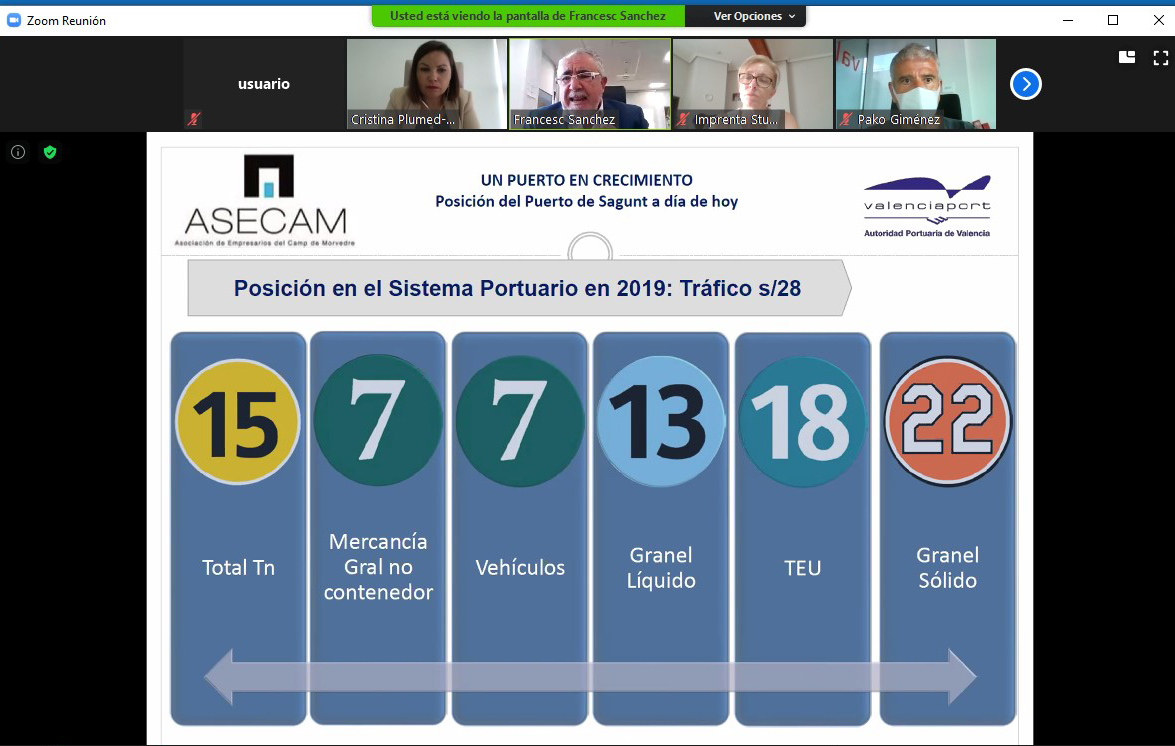 During these investments will enable key infrastructures such as railway access, the border inspection centre or the development of the northern area to be undertaken

The general director of the Port Authority of Valencia, Francesc Sánchez, participated in a webinar organised by ASECAM, where he highlighted “the opportunity we have to design the best options for the third basin of the Port of Sagunto”

València, June 29th, 2020.- The general director of the Port Authority of Valencia (PAV), Francesc Sánchez, has highlighted that “the Port of Sagunto is a growing infrastructure that is fundamental for economic activity, the business fabric and society due to the commitment to Port-City integration that we are developing from the PAV. Valenciaport’s commitment to this infrastructure is reflected in the fact that we are going to invest 135.9 million euros over the next few years and begin the study for the future Tercera Dársena”.

Francesc Sánchez has participated in a digital meeting organized by the Association of Businessmen of Camp de Morvedre (ASECAM) on the Port of Sagunto. The general director of the APV has highlighted the investment plan being developed by Valenciaport in the facilities of Sagunto for the coming years 2020-2025. “One of the infrastructures that are already underway is rail access and beach tracks, which has a budget of 35 million euros and will be a qualitative leap for activities in the Port,” he said. The works will connect the facilities of Parc Sagunt with the port, beach tracks will be built and two branches that will connect with the central and southern area of the port for loading and unloading operations for 750-metre trains. This initiative is also supported by the European Union through the ERDF funds. This Investment Plan for the Port of Sagunto also includes the improvement of railway connections on the Sagunto-Teruel-Zaragoza line, which has a budget of 50 million euros.

Sánchez also highlighted the new Border Control Post, whose work has already been completed and which is expected to be operational by the end of the year, which will enable “the development of new traffic such as containers requiring customs controls”. During his speech, the general director of the PAV pointed out the implementation of the bulk warehouse of the new terminal in the northeast quay that will be built by Noatum or the next tender of the Multipurpose Terminal in the Centre Quay that will have a public investment of 7.5 million euros and a private part that amounts to 10 million. In addition, Valenciaport is working on a firm commitment to the integration of the Port and City in the northern area so that “it will be an element for the city to enjoy cultural, sports and leisure activities for all citizens,” said Sánchez.

“All these actions reaffirm Valenciaport’s commitment to Sagunto as a growing port, an activity that we have been strengthening for years and which translates into the increased importance of Sagunto among Spanish ports, and which we will continue to develop with the Third Basin,” said the director general of the PAV. In this sense, Francesc Sánchez indicated that “this new dock on which we are going to start working will be an opportunity to design it together, to analyse which model is of interest to us in accordance with the strategic requirements and needs of the Port of Sagunto”.