The activity on the docks of the València, Sagunto and Gandia sites did not stop during the most complicated periods of the pandemic. Their work was essential for the public and companies to be able to continue operating ‘normally’

The Port Authority of Valencia (PAV) acted on three levels: economic, social and communicative to continue with the day to day running of the port and to value the work of the logistics community

The campaigns #AlPieDelCañón and #ImágenesImborrables have strengthened the city-port relationship and have helped society on three levels: economic, social and communicative

The work of the PAV during the confinement and the pandemic has been recognised by international organisations: the United Nations Conference on Trade and Development (UNCTAD), the European Sea Ports Organisation (ESPO) and the Association of Mediterranean Cruise Ports (MedCruise).

València, March 14th, 2022.- 13 March 2020, the Spanish Government decrees a State of Alarm to contain the spread of infections caused by SARS-CoV-2. The arrival of COVID-19 turned our lives upside down and caused a change in routines at national and international level. During 2020, ICUs collapsed, the hospitality industry closed down, schools closed to start telematic teaching, balconies became the only place to breathe fresh air, and eight o’clock in the evening was the time to be grateful for the role of the health workers. Despite being a year in which everything came to a standstill, the ports did not do so and demonstrated that they are essential, working intensely so that society was not left without supplies in one of its most difficult moments. The pandemic made the importance of the logistics and transport sector visible. This action continued throughout 2021 and continues this year, still marked by COVID-19 and the conflict in Ukraine.

To remember these extraordinary and complex years, the Port Authority of Valencia (PAV) has edited a video to remember the work of the port community, and of all the people who made the world not come to a complete standstill during the most complex days of the pandemic and the confinement. The images illustrate and highlight the work of so many professionals who made it possible for supermarkets to be stocked with goods, for health workers to have protective equipment and for companies to continue producing. The video has been produced in Spanish, Valencian and English and can be seen on the Valenciaport youtube portal. 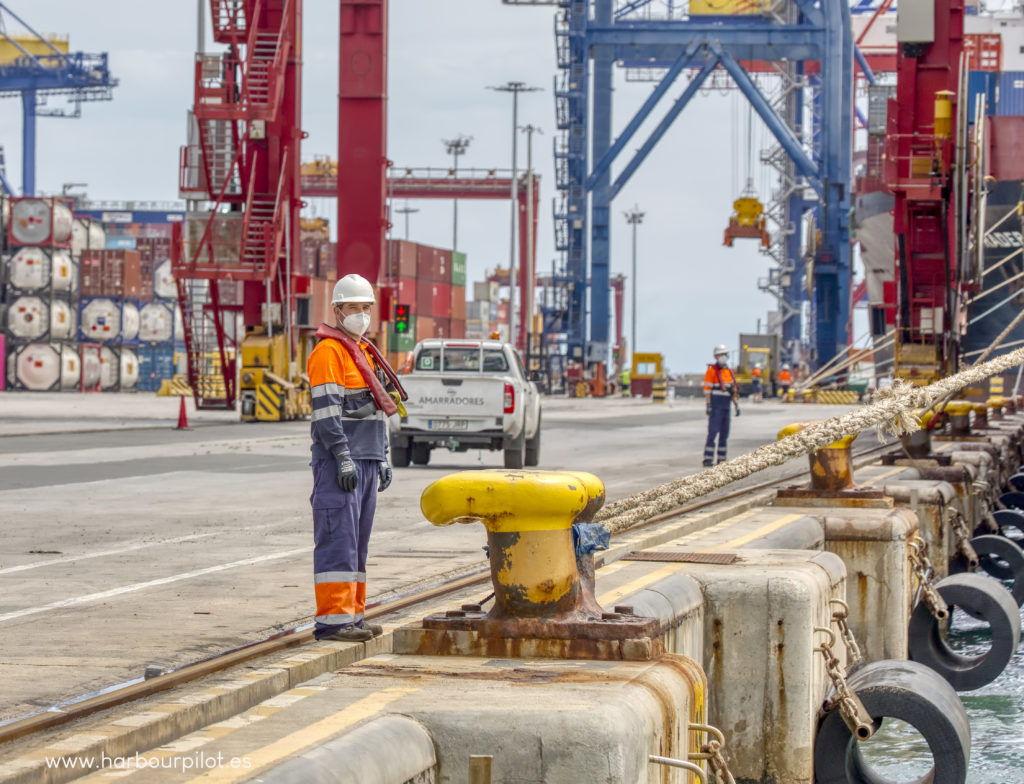 Valenciaport used all its means to be at the side of the citizens and to offer its help in all possible areas. The ports never stop, and during the pandemic they continued to work on the front line to guarantee supply to their neighbours. Their determination to achieve this resulted in the creation of the #AlPieDelCañón initiative. Under this umbrella, an action was designed that focused on addressing needs on three fronts: economic – to help companies -, social – to assist people -, and communicative – to make the work of professionals visible.

The president of the PAV, Aurelio Martínez, explains that “the Port is not an entity, but provides a service to the productive network and to society. We are facilitators of economic activity and therefore we must do everything possible to ensure that companies are active. During the pandemic, we acted swiftly to put in place all the human, financial and health mechanisms so that activity could continue as normal”.

And this is what Valenciaport did. To continue with this “normality”, it was essential that all ships arriving at Valenciaport terminals to load/unload should carry out these operations in the usual way as in the pre-pandemic period and in total safety. Moorers, port policy, pilots, stevedores, transporters… many professionals who were at all times on the ball. “We applied all the necessary measures to comply with the protocols required by COVID-19, ensuring the safety of all the workers who were directly or indirectly involved in the operation, and adapting to the particularities of each moment”, says José Martín Tur, head of Operations at the PAV.

In the economic sphere, a reduction in port taxes of 5.6 million euros was carried out, 2.64 million euros in bonuses pending for 2019 were advanced and collections from companies were delayed to the tune of 29 million euros. “These actions gave a lifeline to many companies and workers,” says José Antonio Morales, head of Economic-Financial Management. For the PAV,” he continues, “it was essential, given the economic problems arising from the pandemic, to provide our customers and suppliers with tools that would make their day-to-day lives easier and allow companies to maintain liquidity, postpone payments and guarantee their workers’ income.

From the social point of view, it is worth highlighting the work carried out by APORTEM-Puerto Solidario, a project made up of some thirty associations, institutions, companies and individuals linked to the Valencian port logistics sector, including the PAV, which helps families and children at risk of social exclusion. During 2020, APORTEM did a great deal of work among the most disadvantaged schools and groups to introduce hygiene and protection against COVID-19 and attended to the needs of families in the neighbourhoods near the ports. “We are part of our neighbourhoods, our cities and their residents. For this reason, we will always do our bit to improve the quality of life of our immediate surroundings, with special attention to the most vulnerable people and groups”, emphasises Marta Villalonga, head of the PAV’s Presidential Office.

The communicative part was approached from a perspective in which the aim was to give a voice to the often-invisible professionals of the port community. “The confinement made us at Valenciaport realise that it was time to act and show the faces of the men and women who were giving their best so that nothing would stop on the other side of the docks. We activated the social networks to broadcast the day-to-day life of the entire port and logistics community during the pandemic,” says Vicent Palaci, head of communication and external relations at the APV. 160 videos were broadcast on the social networks, showing the work of the stevedores, pilots, port police, carriers, customs agents and captains explaining their role. The success was such that, despite initially relying on national testimonies, the campaign was extended internationally, acquiring a total of 100 more videos in 14 different languages from other ports and countries such as France, Panama, Italy and China. 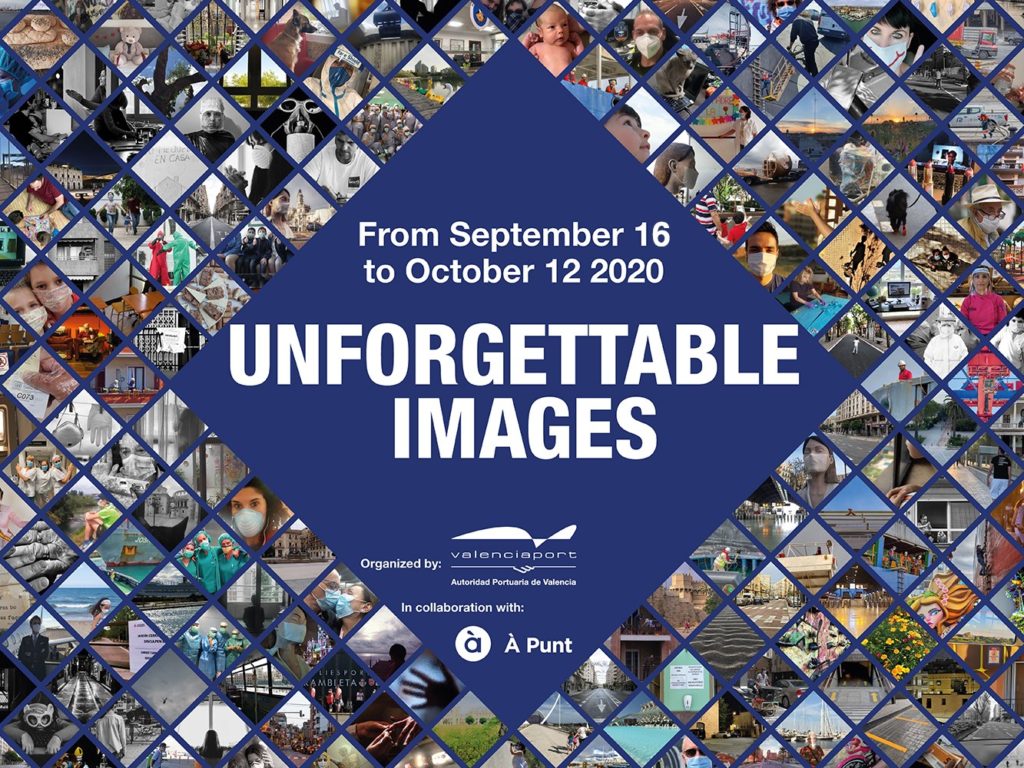 The view of society

“The videos are a demonstration of the importance of the ports and the feedback from the population was obtained through another campaign, #ImImágenesImborrables, in which we encouraged people to photograph their surroundings, living rooms, the street, hospitals… everyday life was the setting for images that were unthinkable until then”, explains Francesca Antonelli, head of marketing at the PAV.

#ImágenesImborrables received more than 2,000 photographs from more than 1,000 different people and allowed the Port of Valencia to become a channel of communication of feelings. The response from society was so great that Valenciaport organised an exhibition. A team of graphic journalists selected 200 photos from among all those received for an exhibition in the Clock Building which made headlines all over Europe and which, despite the restrictions, was visited by more than 3,000 people.

The key to the success of this exhibition was that it was a great example of civic journalism, society photographed what it considered needed to have a voice, so that citizens saw themselves reflected in the exhibition and empathised with it. The images range from sick patients in hospitals and doctors exhausted by their workload to children on the balconies of their homes.

The work of the PAV during the pandemic has been exceptional, so much so that it has been recognised in a report by the United Nations Conference on Trade and Development (UNCTAD). This highlighted the strategy developed by Valenciaport from an operational, health, economic and social point of view to enhance the port community’s activity to minimise the impact of COVID-19. This work has crossed borders and has received several awards. Thus, the Association of Mediterranean Cruise Ports (MedCruise) awarded the APV for its management of the pandemic on social networks. It has also become a finalist in the 13th edition of the European Sea Ports Organisation (ESPO) Awards in the category of Social Integration of Ports. “These awards endorse the public service function of Valenciaport and highlight the value of transmitting and explaining to the people the importance of the ports for communication between countries and cultures, the generation of economic activity and their contribution to the well-being of society”, points out Aurelio Martínez.

In short, the pandemic demonstrated that despite being a year marked by uncertainty and isolation, the Port of Valencia could turn the situation around and offered solutions for each setback that appeared. Its professionals have become examples of overcoming, as they worked daily exposing themselves to an unknown disease while most of the society was unable to leave their homes. For this reason, all the awards they have received are a symbol of the great work they have done. A work at the service of the city and society.