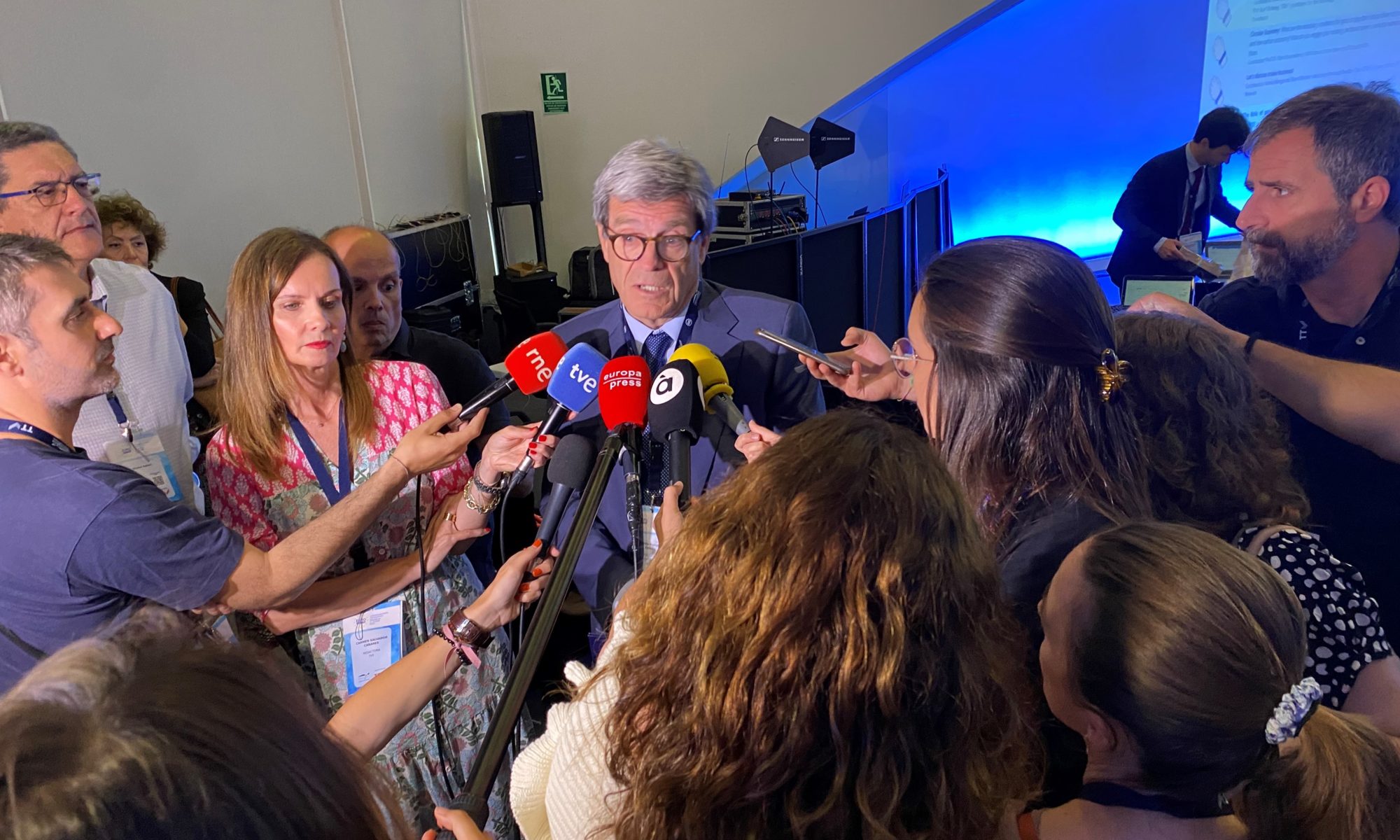 The president of the Port Authority of Valencia (PAV) points out that “the energy transition, digitalisation, innovation and geopolitical changes are the great challenges facing the port sector”

Martínez points out that the new container terminal “will use the most advanced technologies, including Artificial Intelligence, to manage operations under the principle of zero emissions”

Álvaro Rodríguez Dapena, president of Puertos del Estado: “The development of a new terminal, in an extension that has already been completed and with an EIS in force, is a great opportunity for the companies

The president of the PAV has participated in the inauguration of the Conference of the European Sea Ports Organisation (ESPO) together with Álvaro Rodríguez Dapena, the regional secretary for Public Works, Transport and Sustainable Mobility, María Pérez, and the president of ESPO, Annaleena Mäkilä

The environment, new technologies, geopolitical changes or demographic challenges are the great challenges facing European ports. “For this reason, the port community must align itself with the needs of the European Union and of our countries to continue to defend our international role at both political and economic level. As stated in the ESPO Valencia Declaration presented yesterday, the institutions must make a strategic commitment to the ports and infrastructures, which are essential in the fight against climate change, the development of cities, economic activity and the geopolitical situation”, defended the president of the Port Authority of Valencia (PAV), Aurelio Martínez, during the inauguration of the Conference of the European Sea Ports Organisation (ESPO), which is being held in Valencia, and which brings together more than 200 experts from associations, companies and port administrations of the countries of the European Union.

The head of Valenciaport pointed out that “this event gives us the opportunity to reflect once again on the role of the ports in ensuring the resilience of these logistics chains and at the same time, as the engines of growth that we are, to collaborate in the recovery of our economies, to create stable and quality employment for the communities in which we live and to form part of this blue economy that we all believe is such an important part of the future of these communities”.

The president of the PAV took part in the inauguration of the ESPO Conference, in an event that also included the president of Puertos del Estados, Álvaro Rodríguez Dapena, the regional secretary for Public Works, Transport and Sustainable Mobility, María Pérez, and the president of ESPO, Annaleena Mäkilä.

Aurelio Martínez explained that “at Valenciaport we have set ourselves the great transformation objective of becoming a zero emissions port by 2030, involving the entire port community around a common plan that presides over our strategy and transcends our initiatives”. For this reason,” he continued, “we are actively incorporating new energy technologies, such as hydrogen, into port operations and exploring the different applications they can have. We are also working with other alternative energies such as photovoltaic or wind installations”.

An example of this search for sustainable solutions in port operations is the new container terminal that will use the most advanced technologies, including Artificial Intelligence, to manage operations under the principle of “zero emissions” from the outset. The same objective is central to the new passenger terminal, which also encompasses the recovery of Valencia’s historic industrial heritage.

In this sense, the president of Puertos del Estado, Álvaro Rodríguez Dapena, has stressed that “the development of a new terminal in an extension that is already done, with an EIS in force, and without any problem from the environmental point of view, is a great opportunity to turn it into a base in the western Mediterranean for maritime connectivity with the rest of the world. Spain has shown that we are the first country in Europe in terms of container connections, which allowed us to overcome the 2008 crisis and will allow us to overcome the current crisis, because these infrastructures allow the business fabric, and especially SMEs seeking opportunities in the market to go abroad, to have the possibility of reaching any country in the world”.

In terms of innovation, Aurelio Martínez pointed out that “together with the Valenciaport Foundation, we have launched the OPENTOP project, the open innovation centre for the port logistics sector, which we want to serve as a lever to attract talent and develop innovative ideas and solutions for the sector. In addition, in Valencia, together with the rest of the Spanish port authorities and in coordination with Puertos del Estado, we have created the Ports 4.0 Fund, the largest fund to support open innovation in Europe, now in its third campaign”.