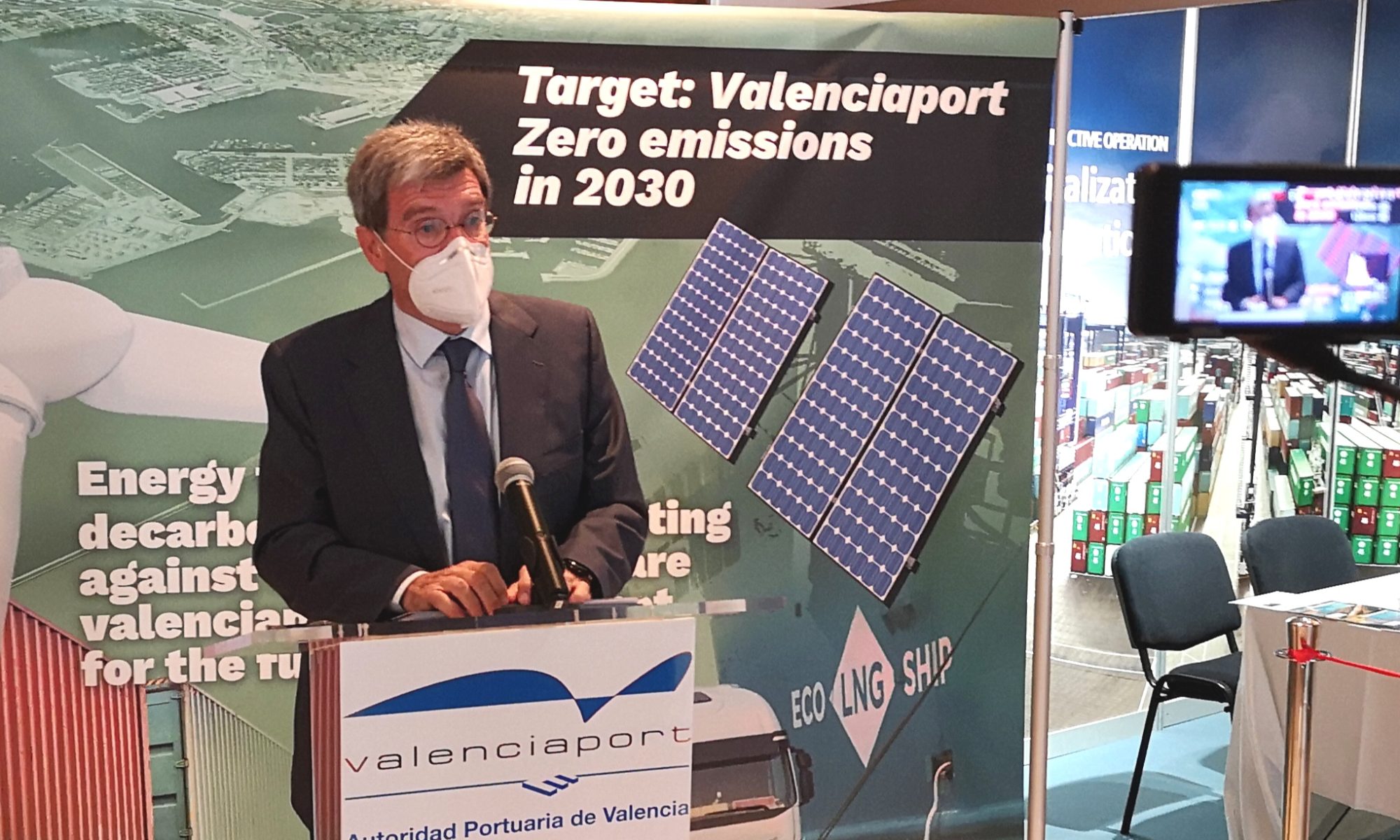 The regional minister for Territorial Policy, Arcadi España, has assured that València would be unimaginable without its port: “Thousands of companies, farmers, self-employed and families depend on the Port of Valencia”.

The president of the Port Authority of Valencia (APV), Aurelio Martínez, has indicated that “the high freight rates affect exports which will have a lower rate of growth than we could have obtained in a normalised context”.

During his speech at the Mediterranean Ports and Shipping conference held in Valencia, Martínez explained the causes of the increase in freight rates, such as the increase in internal demand, the congestion generated in some ports and fuel prices.

The councillor emphasised that Valenciaport is an example of an infrastructure that shares its benefits with the city by financing the metro, the regeneration of beaches and the headland park or reducing its environmental impact.

Mediterranean Ports and Shipping 2021, a forum for specialised debate on the needs and challenges for the transport and logistics sector in the Mediterranean area, was inaugurated today.

The president of the Port Authority of Valencia (PAV), Aurelio Martínez, has assured that “freight prices will normalise in the second half of 2022 when international demand slows down. Higher freight rates mean higher costs and therefore less exports for regions like ours, which will mean that the growth rate will be lower than what we could have obtained in a normalised context”. The president of the PAV inaugurated the Mediterranean Ports and Shipping 2021 conference in an act that was accompanied by the Regional Minister for Territorial Policy, Public Works and Mobility, Arcadi España, the director of State Ports Operations, Mar Chao, and the director of Transport Event, Rory James Dyole.

During his speech, Martínez explained the behaviour of transport tariffs in the current context, which is characterised by record highs, sustained increases over a long period of time and increases in all routes and types of traffic. For the president of the PAV, this increase in freight rates is due to various causes such as “the increase in internal demand, especially in the United States; the congestion generated in the North American logistics chain where there are ships stopped for 15 days in ports such as Los Angeles to unload; the deficit of containers in the face of the increase in international demand; or the prices of bunkering and fuels”. For Martínez, the consequence of this situation is an increase in the time ships spend in ports, important shortcomings in the entire logistics chain in some countries, an impact on inflation, an increase in import/export costs and, therefore, a slowdown in world growth”.

The president of the PAV pointed out that we can learn a lesson for the future from this situation which is affecting maritime transport, “when you launch a measure to increase internal demand with the same infrastructures and suddenly many ships come in, you cannot provide services to everyone. This is the problem, the infrastructures of the United States were not prepared to withstand this avalanche of imports, which has been one of the fundamental reasons that is affecting freight rates”.  In this line, he assured that “in the United States inventories are still very low and they are selling a lot so they need to replenish them. The boom in demand will continue for a few more months, but it won’t last forever. We believe that by the middle of 2022 this situation will normalise”.

“València is impossible to imagine without its port”

The Regional Minister for Territorial Policy, Arcadi España, also took part in the same event, highlighting the importance of the Port of Valencia for the city and the regional and Spanish economy. The ports”, explained the representative of the Valencian Government, “are windows of progress and the cities which have a port know this. It is impossible to imagine Valencia without its port. Thousands of companies, thousands of farmers, thousands of self-employed and thousands of families depend, have depended and will depend on it. Their future is linked to it. The Port is not a city within the city, it is its city”. In this sense, the councillor emphasised that “infrastructures are a means that have to share their benefits to compensate for their costs, as the Port of València is doing by financing the metro line, the regeneration of the beaches, the headland park and reducing their impact by incorporating the train more, committing to renewable energies and innovation”.

The regional Minister acknowledged the work of port and logistics professionals and warned of the fragility of globalisation in the face of the rupture of its value chain, the redefinition of just-in-time and the need for a more regionalised globalisation. In view of the environmental challenges, Arcadi España explained that “we have been obliged to accelerate the changes in digitalisation, reduction of carbon emissions and innovation; so if I had to define the three priorities in port matters, they would be sustainability, sustainability and sustainability”.

A meeting to highlight the value of Mediterranean ports

The Mediterranean Ports and Shipping conference is an international logistics event with two days of lectures by 30 speakers who will focus on the needs and challenges for the transport and logistics sector in the Mediterranean area. The conference will be attended by more than 100 participants, including representatives of administrations, company managers, port authorities, shipping companies, terminal operators, importers and exporters, among others.

The person in charge of this event, which had previously been held in cities such as Casablanca, Livorno and Barcelona, Rory James, highlighted that once again “face-to-face events such as this one can be held, bringing investors into contact with the main ports of the Mediterranean, an opportunity to generate business”, and thanked “Valenciaport for its commitment to this event and for the visit to its facilities, which has allowed us to learn about the activity of the Port of València”.